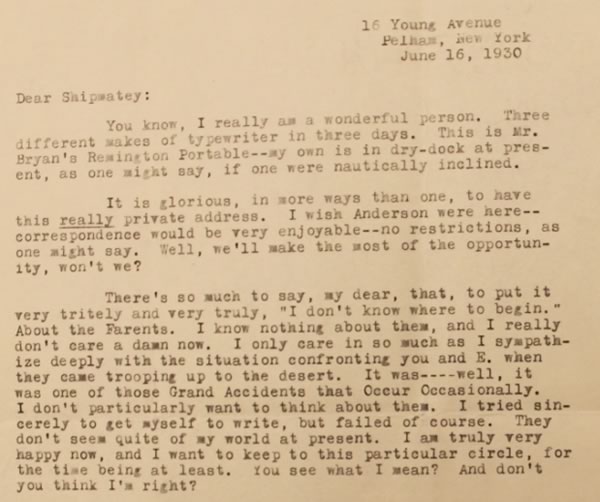 You know, I really am a wonderful person. Three different makes of typewriter in three days. This is Mr. Bryan’s Remington Portable–my own is in dry-dock at present, as one might say, if one were nautically inclined.

It is glorious, in more ways than one, to have this really private address. I wish Anderson were here–correspondence would be very enjoyable–no restrictions, as one might say. Well, we’ll make the most of this opportunity, won’t we.

There’s so much to say, my dear, that, to put it very tritely and very truly, “I don’t know where to begin.” About the Farents. I know nothing about them, and I really don’t care a damn now. I only care in so much as I sympathize deeply with the situation confronting you and E. when they came trooping up to the desert. It was—-well, it was one of those Grand Accidents that Occur Occasionally. I don’t particularly want to think about them. I tried sincerely to get myself to write, but failed of course. They don’t seem quite of my world at present. I am truly very happy now, and I want to keep to this particular circle, for the time being at least. You see what I mean? And don’t you think I’m right?

The only thing that makes me unhappy now is that my dreams are going through their death-flurries. I thought they were all safely buried, but sometimes they stir in their grave, making my heart-strings twinge. I mean no particular dream, you understand, but the whole radiant flock of them together–with their rainbow wings, iridescent, bright, soaring, glorious, sublime. They are dying before the steel javelins and arrows of a world of Time and Money. I am happy the whole live-long day–happy as a bird–but when night comes and I settle down in bed for a night’s sleep, then my tortures begin. I don’t know when I’ve had a night’s sleep without a prelude consisting of an hour or so of writhing! By day I think it’s a grand old adventure; by night I think it’s Hell, and double Hell.

I am seeking a Yob. Yobs are (as the Naturalist said, speaking of the “big game” in the West Indies) few and far between. I have several lines out, and something may bite someday. It must. I can stay here as long as I like, and I have forty-five dollars, earned from Dr. Paul, and he owes me about ten dollars more–that will pay carfare to N. Y. for some time to come. (G.D! how I hate this machine)

The MS may sell. Harper has rejected it. Helen is in the hands of two female agents, who seem to be very influential people around here. They make lavish promises, and Helen believes; Barbara, the skeptic, says: “A bird in the hand, etc.” Anyway, Collier’s, American, the Companion, and Good Housekeeping, are all interested, and will all have a shot at it–and, as I said, these two ladies seem to be influential. Someone telephoned their office about it while I was there talking, and one of them said: “Oh, but you’ll have to stand in line, you know.”  Which delighted Helen beyond measure, naturally.

Oh, I wish, and WISH Mr. R. and Phoebe could go to Russia alone. I think it would be the best thing that could possibly happen, for both of ’em. Meanwhile, you and I will hold down the continent of North America until they come back, in the very distant future–or, perhaps, until you follow them over. In all events, they should go alone for a while, and you and I should be together somewhere, with our cocoa cups.

You and I could have the most excellent laugh about these people right here, for instance. I told you a little about them when I was out there. They have become even worse. They never go out of the house at all. If Mrs. Bryan has to go down to the village on some little errand, Mr. Bryan stands by the window and peers anxiously forth until she returns. At night every bolt and lock and key in the whole house is drawn or turned; the chain bolt on the front door, both locks, the knob on the screen-door, the key on the inner door, and all the windows fastidiously bolted. I never saw such terribly, appallingly fastidious people in all my days. They’re worse than Mrs. Hayball. There re two “objects” in the kitchen, and neither is ever used at all. The “swamp angels” are fastidiously removed and put outdoors at once.  The say that those two objects are merely for use in the winter, when it is too snowy or dripping to go outside. It seems strange, when one considers all this, that Mr. B. doesn’t keep the type of his Remington in better shape.

Mrs. B. never does any house-work at all, except for very superficial “picking-up” and dusting around. Every Saturday she has  man come to clean house. The Two themselves do nothing but sit, first in one chair and then in another. They don’t know what to do or think about–and the result is 0. They listen to the same things every night on the radio, and go to bed in the same way. But it amuses me infinitely. I enjoy it, I have to say. I am more private than I’ve had the privilege of being for a long time. I josh them good-naturedly, and they seem to like it–but they don’t know what to make of me. You can readily imagine what  vague, scandalous, unaccountable, phenomenal sort of Thing I am to them!

What are you going to do about the pot-boiler? Take out the fox-meat? It’s somewhat ironical that the market you scorned should have dumped you, isn’t it? That’s what comes of being snotty, even if it’s only mental. Well, good luck to it (damn this ribbon!) I think, as always, that the whole great Thing we call Life is one huge practical joke, anyhow. If we take it as such, it is instantly powerless, and we may with impunity exult. THEN–the old Joke treats us Well for a change, and we begin to forget that it is a Joke–with the result that we are unprepared for the next battering. Then is heard the rumbling, ironical Laughter of the Gods. I think a good, sound, healthy pessimism is a Wise and Noble Thing.

Don’t be so humble and modest. You’re a wonderful safety-valve; and I damn well hate to think that you were nothing but that (Oh, the language which is going on inside me about this ribbon!)–a safety-valve? No, no–you’re about the best friend anyone ever had, or ever imagined. To be a safety-valve is just a small item which is an automatic and natural part of a Friend, don’t you think so? As for Anderson, he has served my needs a whole year now, and a rest will do both of us good, I suppose–though it is a little strange not to be able to anticipate those pencilled, air-mail envelopes! I shall hear from him–barring accidents–about the first week in October. I expect he will show up on this coast shortly afterwards. It would be like him to do so. Besides, I flatter myself a little that perhaps my friendship did something for him, too. I think we were mutually very good for each other–let the Farents say what they may!

Do you realize that a year ago yesterday I set sail from Honolulu harbor in my beloved Vigilant? I was rather glum all yesterday thinking of it. It hurt. I suppose it will be years before I go to sea again, and I may never even see that schooner. I suppose that I spent about the happiest month of my life during that sea-trip in her. and it lasted even during that week in port, when I took over the cabin-boy’s job, and when Helen, Anderson, and I had cherry- and ice-cream-parties in the cabin after everyone had gone ashore, and when we used to walk up into that virgin forest two miles up the road, and eat salmon-berries. Life was beautiful then. This doesn’t seem like the same era. Here the beauty consists of great stone towers against the sunset–sublime, symbolic, but away above the plane of us poor ants that hustle along the swarming streets at their feet, so engrossed in ourselves that we never even see a fellow-mortal, but bump into him with a bang, and then hurray and hurry on.

It makes one’s heart and soul suffer–it stabs them to the quick. Oh, for wings, for wings!

That is, in general, the theme not only of my own heart, but of the book I’m going to write. I ought to be able to write it–I live it constantly. My heart is the field of a thousand battles every day.

But I’m happy, really–you understand that, don’t you? And I’m coming up, and up. Not a day passes but that I myself climb a little–somewhere. I am getting gradually to a point where I can trust myself, put faith in myself. Gradually, and cautiously. Once I tried it before I was ready, and the cargo spilled. But I’m Building, always. If I can put unbounded faith in myself, I don’t care what happens. And I can, as time goes on.

P. S. Dr. Paul spends time and postage writing me love-letters! He also sends me now and then a batch of stuff to edit and typewrite. This is Well–it means Cheques!