Most of the letter from Barbara to Cousin Helen, July 6 1921:

I will now tell you about my cats. In the first place, Mr. Mcfarland has a cat named Booskey; and in the second place, I have a little kitten named Buff. I will not describe Booskey because he is just a plain black and white cat; but Buff is worth describing because there aren’t many cats like her. What is the use of describing a cat as common as Booskey? He is all described when you say he is black and white, and his spots aren’t in very good order, either. But Buff is a little beauty: all her feet are white, and her legs are yellow with spots of white; her tail is yellow with rings of white. She is white underneath, and the white gets narrower and narrower up to her sides; her back is yellowish-brown, and her head is yellowish-brown with two lines of white going up to her ears. You may think when you read her description that she is a very complicated cat to describe. When we found Buff in the yard at first Booskey would spit at her and then run away as fast as he could, and Mr. Follett said that he didn’t fight because he knew he would be whipped if he did. Then Booskey began to just sit before him and growl and spit; finally they began to go out-doors together, and Booskey is quite a friend of Buff now. Just the same he does growl a little when he sees her.

I’ll tell you now something about what Buff does. She will sit in my lap and purr and purr until  it seems as if she would purr her throat weak. Then she looks so cunning when she is sitting and washing her face with one paw, and she will wash my own face with one little pink tongue. Her tongue is so rough that it seemed to tear the skin off my face as I was writing your letter this morning. If you drag a string in front of her she will run after it with great force; I suppose she runs after it so fast because she is anxious to get hold of it. Also, when I throw a cork or a piece of paper to her she will run to it, clasp it in her front paws, jump in the air with it, twist half her body ‘round while she is up, and come down with her eyes wide open. While she is doing this, her ears are turned forward as far as they will go, and her eyes are as far open as they can be. There are many other things that Buff can do, but I can’t tell them all to you this time. 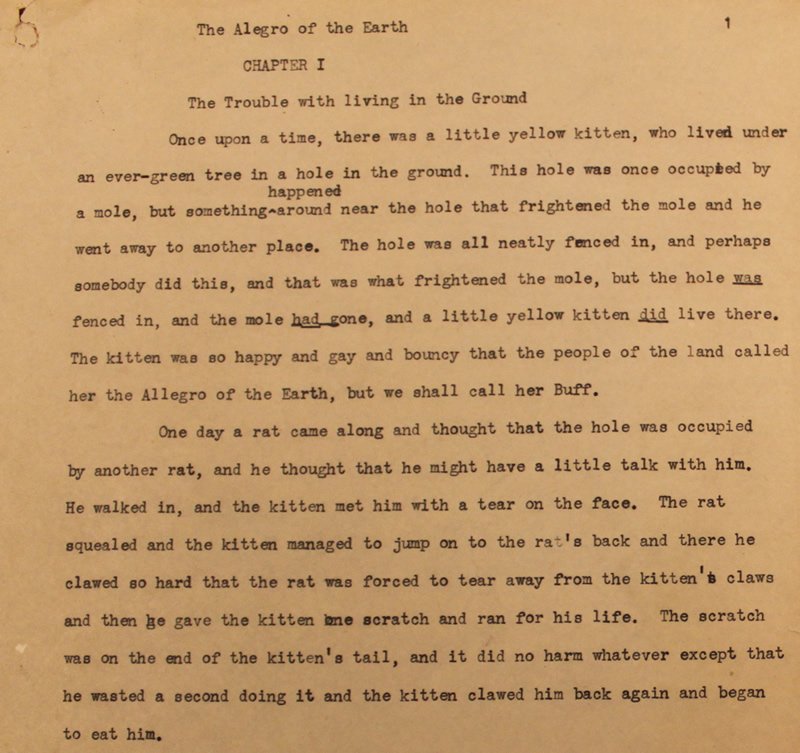 The Allegro of the Earth

CHAPTER I
The trouble with living on the ground

Once upon a time, there was a little yellow kitten, who lived under an ever-green tree in a hole in the ground. This hole was once occupied by a mole, but something happened around near the hole that frightened the mole and he went away to another place. The hole was all neatly fenced in, and perhaps somebody did this, and that was what frightened the mole, but the hole was fenced in, and the mole had gone, and a little yellow kitten did live there. The kitten was so happy and gay and bouncy that the people of the land called her the Allegro of the Earth, but we shall call her Buff.

One day a rat came along and thought that the hole was occupied by another rat, and he thought that he might have a little talk with him. He walked in, and the kitten met him with a tear on the face. The rat squealed and the kitten managed to jump on the rat’s back and there he clawed so hard that the rat was forced to tear away from the kitten’s claws and then he gave the kitten one scratch and ran for his life. The scratch was on the end of the kitten’s tail, and it did no harm whatever except that he wasted a second doing it and the kitten clawed him back again and began to eat him.

Then a little green-spotted snake came along into the kitten’s hole. The kitten got so mad that she tore his head up, and then scratched his back up, and then she pushed the body of the snake out through the little gate in the fence and pushed it way away from the hole so that it wouldn’t smell badly, and then she went back into the hole and ate up the entrails of the rat, and then she settled down to go to sleep.

She had not slept long before a little black kitten came along and poked her. Buff got up at once and jumped right on to the black kitten’s back, while the black kitten squealed with pain. At last he tore away from Buff’s claws, but Buff had been badly scratched and clawed. She tried to get to sleep once more, and this time she was asleep for three solid hours.

CHAPTER II
Buff spends a day in the house

Buff knew about the natures of the house, and thought that he would try to find out which he liked better, the earth or the warm hearth. In order to find that out he knew that he must spend a day in the house—a day of secrecy, and then spend one more day in the hole, and then compare the house and the earth and see which he would rather do. So one night Buff crept very quietly to the porch, and there he climbed in the dining-room window. When he went into the pantry a mouse fled across the floor, and in a flash Buff had caught the mouse and was devouring it as fast as possible. When he went out in the kitchen he had the same luck, and he had proved in one way that the house was better than the hole in the ground. The kitchen fire was burning, and Buff lay down and slept, until he heard the sound of people rising. Then he went out of the dining-room window and nobody knew a thing about it.

The next night Buff spent in the hole, and she didn’t have any warm fire to sleep by, and she didn’t catch a mouse right before her, but she had to wander far to get her supper.

But the next night she did spend in the house and she made a supper of four mice, and had the warmth of the fire all night.

When the morning came Buff scampered away as usual, and then she came back again in the middle of the day; the gardener was out in the garden and he saw this kitten out in the garden. He called to her and at first she pretended to be afraid, but pretty soon she came to him and rubbed against his legs. He said: “Why, where did you come from you cunning thing?” And he took her into the house and said that he had found a kitten and that he wanted to tame it.

“It will be too much of a trouble,” said the people in the house, “and what do we want of a cat, and I hate the looks of yellow cats.”

“Well, that is just what I love,” said the gardener. “I always loved a yellow cat. I don’t think that she will be much of a trouble to tame; she seemed quite friendly out in the garden.”

When night time came the gardener stayed up all night to see what the kitten did. This time Buff caught three mice and had those for supper and then she lay down by the fire. When morning came, the gardener said: “All she does is to catch some mice (this time she caught three) and then she lays by the fire and goes to sleep. Indeed she seems quite friendly.” And she was very friendly; she was clean, she didn’t spit at people when they wanted to play with her, but played with them instead, and people didn’t have to set traps for the mice anymore because she caught all the mice, and had some every night for supper. And this way Buff decided that the house was much better than the earth, and this way Buff turned house-cat, and was called “the friend of men.”