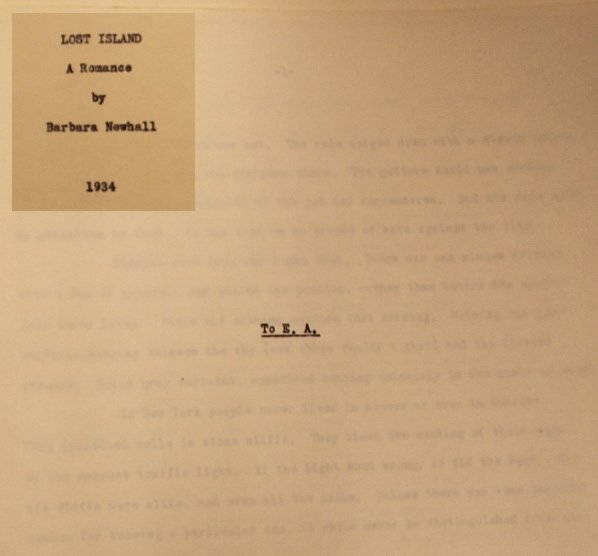 Here’s Chapter I of Barbara’s unpublished novel, Lost Island. All typos are mine. My plan is to post the thing in about fifteen parts, one or two per week.

Not even a cat was out. The rain surged down with a steady drone. It meant harm to New York and everyone there. The gutters could not contain it. Long ago they had despaired of the job and surrendered. But the rain paid no attention to them. It was bent on an errand of hate against the city.

Windows were gray and tight shut. There was one window fronted with a box of pansies, and behind the pansies, rather than behind the window, Jane Carey lived. There was nothing outside, this morning. Nothing but gray curtains hanging between the sky (was there really a sky?) and the flooded streets. Solid gray curtains, sometimes swaying ominously in the gusts of wind.

In New York people never lived in houses or even in burrows. They inhabited cells in stone cliffs. They timed the cooking of their eggs by the nearest traffic light. If the light went wrong, so did the eggs. All the cliffs were alike, and even all the cells.… Read more

Chapter II, (pages 15-28) of Lost Island. All typos are mine. You’ll notice that Barbara circled “flapper” in the first paragraph, suggesting that she might have wanted a different word. Chapter I here. 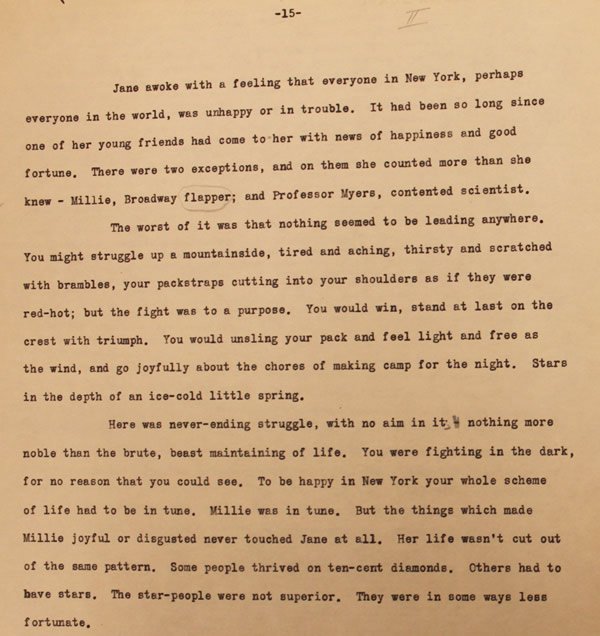 Jane awoke with a feeling that everyone in New York, perhaps everyone in the world, was unhappy or in trouble. It had been so long since one of her young friends had come to her with news of happiness and good fortune. There were two exceptions, and on them she counted more than she knew — Millie, Broadway flapper; and Professor Myers, contented scientist.

The worst of it was that nothing seemed to be leading anywhere. You might struggle up a mountainside, tired and aching, thirsty and scratched with brambles, your packstraps cutting into your shoulders as if they were red-hot; but the fight was to a purpose. You would win, stand at last on the crest with triumph. You would unsling your pack and feel light and free as the wind, and go joyfully about the chores of making camp for the night. Stars in the depth of an ice-cold little spring.

Here was never-ending struggle, with no aim in it; nothing more noble than the brute, beast maintaining of life.… Read more

Chapter III (pages 29-41) of Lost Island. If you missed the beginning, here it is. 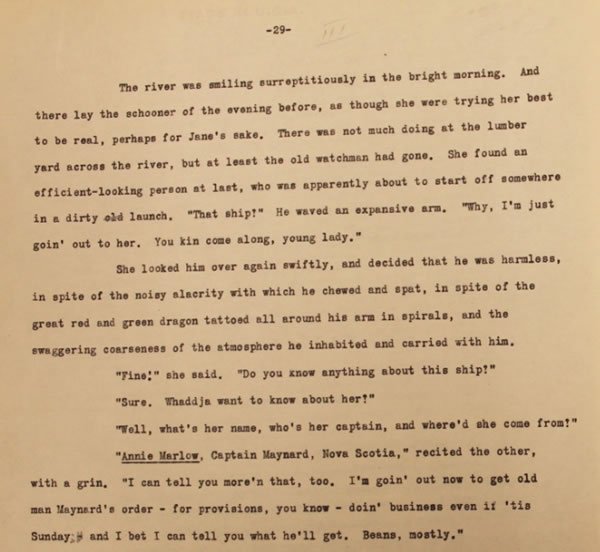 The river was smiling surreptitiously in the bright morning. And there lay the schooner of the evening before, as though she were trying her best to be real, perhaps for Jane’s sake. There was not much doing at the lumber yard across the river, but at least the old watchman had gone. She found an efficient-looking person at last, who was apparently about to start off somewhere in a dirty launch. “That ship?” He waved an expansive arm. “Why, I’m just goin’ out to her. You kin come along, young lady.”

She looked him over again swiftly, and decided that he was harmless, in spite of the noisy alacrity with which he chewed and spat, in spite of the great red and green dragon tattooed all around his arm in spirals, and the swaggering coarseness of the atmosphere he inhabited and carried with him.

“Fine!” she said. “Do you know anything about this ship?”

“Sure. Whaddja want to know about her?”

“Well, what’s her name, who’s her captain, and where’d she come from?” 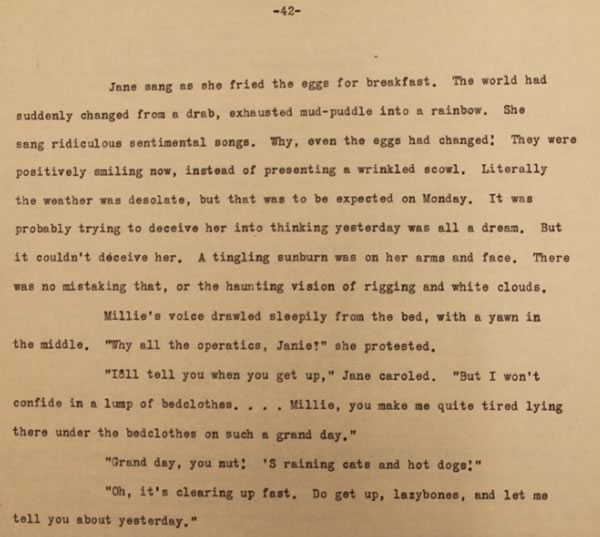 Jane sang as she fried the eggs for breakfast. The world had suddenly changed from a drab, exhausted mud-puddle into a rainbow. She sang ridiculous songs. Why, even the eggs had changed! They were positively smiling now, instead of presenting a wrinkled scowl. Literally the weather was desolate, but that was to be expected on Monday. It was probably trying to deceive her into thinking yesterday was all a dream. But it couldn’t deceive her. A tingling sunburn was on her arms and face. There was no mistaking that, or the haunting vision of rigging and white clouds.

Millie’s voice drawled sleepily from the bed, with a yawn in the middle. “Why all the operatics, Janie?” she protested.

“I’ll tell you when you get up,” Jane caroled. “But I won’t confide in a lump of bedclothes…. Millie, you make me quite tired lying there under the bedclothes on such a grand day.”

“Oh, it’s clearing up fast. Do get up, lazybones, and let me tell you about yesterday.”

“Why didn’t you tell me when I got in last night, if it’s so important, kitten?… Read more 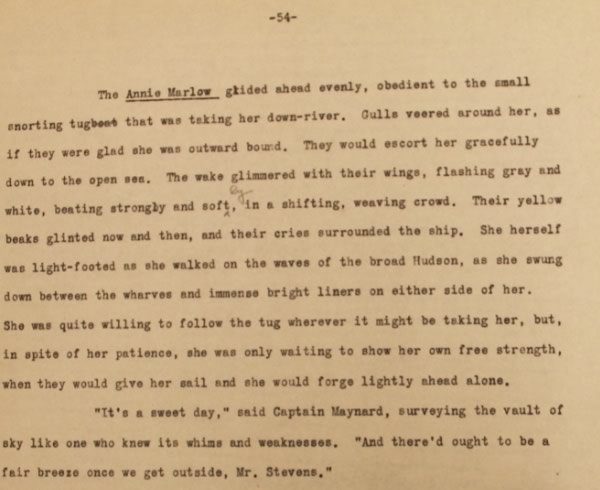 The Annie Marlow glided ahead evenly, obedient to the small snorting tug that was taking her down-river. Gulls veered around her, as if they were glad she was outward bound. They would escort her gracefully down to the open sea. The wake glimmered with their wings, flashing gray and white, beating strongly and softly, in a shifting, weaving crowd. Their yellow beaks glinted now and then, and their cries surrounded the ship. She herself was light-footed as she walked on the waves of the broad Hudson, as she swung down between the wharves and immense bright liners on either side of her. She was quite willing to follow the tug wherever it might be taking her, but, in spite of her patience, she was only waiting to show her own free strength, when they would give her sail and she would forge lightly ahead alone.

“It’s a sweet day,” said Captain Maynard, surveying the vault of sky like one who knew its whims and weaknesses. “And there’d ought to be a fair breeze once we get outside, Mr. Stevens.”

The mate nodded. He was pacing the poop deck slowly, keeping an eye on the tug ahead.… Read more 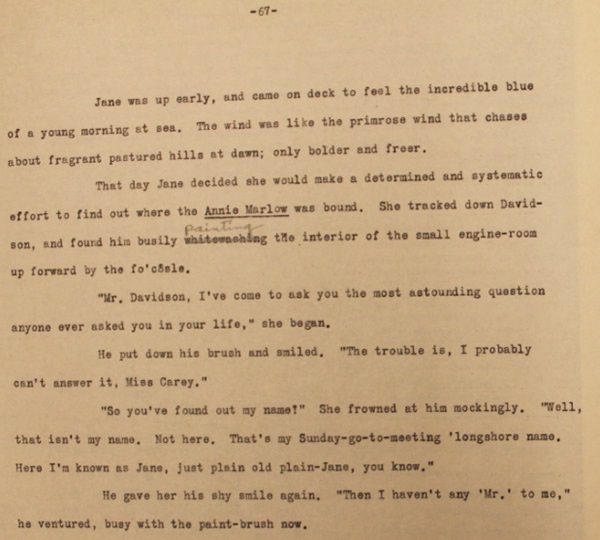 Jane was up early, and came on deck to feel the incredible blue of a young morning at sea. The wind was like the primrose wind that chases about fragrant pastured hills at dawn; only bolder and freer.

That day Jane decided she would make a determined and systematic effort to find out where the Annie Marlow was bound. She tracked down Davidson, and found him busily painting the interior of the small engine-room up forward by the fo’c’sle.

“Mr. Davidson, I’ve come to ask you the most astounding question anyone ever asked you in your life,” she began.

He put down his brush and smiled. “The trouble is, I probably can’t answer it, Miss Carey.”

“So you’ve found out my name?” She frowned at him mockingly. “Well, that isn’t my name. Not here. That’s my Sunday-go-to-meeting ‘longshore name. Here I’m known as Jane, just plain old plain-Jane, you know.”

He gave her his shy smile again. “Then I haven’t any ‘Mr.’ to me,” he ventured, busy with the paint-brush now. 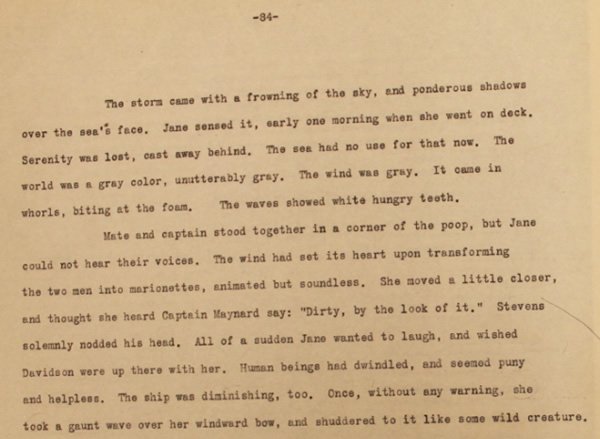 The storm came with a frowning of the sky, and ponderous shadows over the sea’s face. Jane sensed it, early one morning when she went on deck. Serenity was lost, cast away behind. The sea had no use for that now. The world was a gray color, unutterably gray. The wind was gray. It came in whorls, biting at the foam. The waves showed white hungry teeth.

Mate and captain stood together in a corner of the poop, but Jane could not hear their voices. The wind had set its heart upon transforming the two men into marionettes, animated but soundless. She moved a little closer, and thought she heard Captain Maynard say: “Dirty, by the look of it.” Stevens solemnly nodded his head. All of a sudden Jane wanted to laugh, and wished Davidson were up there with her. Human beings had dwindled, and seemed puny and helpless. The ship was diminishing, too. Once, without any warning, she took a gaunt wave over her windward bow, and shuddered to it like some wild creature.

“Best get them topsails in, Stevens,” the captain said. “Then they’ll be in.”… Read more 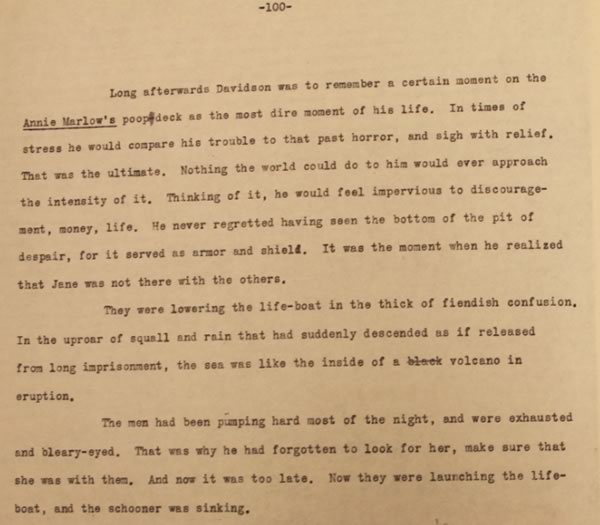 Long afterwards Davidson was to remember a certain moment on the Annie Marlow‘s poop deck as the most dire moment of his life. In times of stress he would compare his trouble to that past horror, and sigh with relief. That was the ultimate. Nothing the world could do to him would ever approach the intensity of it. Thinking of it, he would feel impervious to discouragement, money, life. He never regretted having seen the bottom of the pit of despair, for it served as armor and shield. It was the moment when he realized that Jane was not there with the others.

They were lowering the life-boat in the thick of fiendish confusion. In the uproar of squall and rain that had suddenly descended as if released from long imprisonment, the sea was like the inside of a volcano in eruption.

The men had been pumping hard most of the night, and were exhausted and bleary-eyed. That was why he had forgotten to look for her, make sure that she was with them. And now it was too late. Now they were launching the life-boat, and the schooner was sinking.… Read more 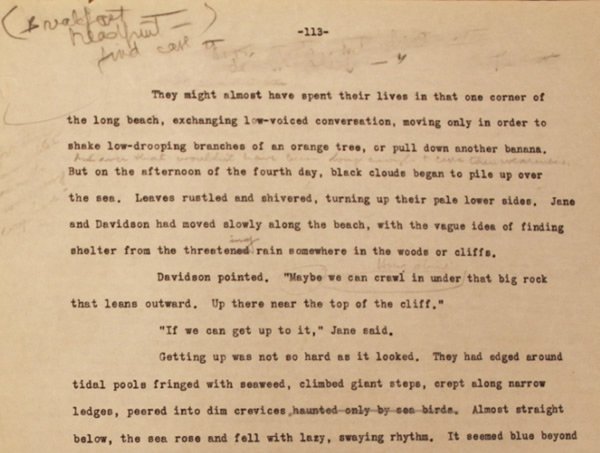 They might almost have spent their lives in that one corner of the long beach, exchanging low-voiced conversation, moving only in order to shake low-drooping branches of an orange tree, or pull down another banana. But on the afternoon of the fourth day, black clouds began to pile up over the sea. Leaves rustled and shivered, turning up their pale lower sides. Jane and Davidson had moved slowly along the beach, with the vague idea of finding shelter from the threatening rain somewhere in the woods or cliffs.

Davidson pointed. “Maybe we can crawl in under that big rock that leans outward. Up there near the top of the cliff.”

Getting up was not so hard as it looked. They had edged around tidal pools fringed with seaweed, climbed giant steps, crept along narrow ledges, peered into dim crevices. Almost straight below, the sea rose and fell with lazy, swaying rhythm. It seemed blue beyond anything that blue could be. Farther back, along by the beach, it changed abruptly to clear blue-green; and sea urchins could be distinctly seen, very black and bristly against the magic of flickering lights on the sand.… Read more 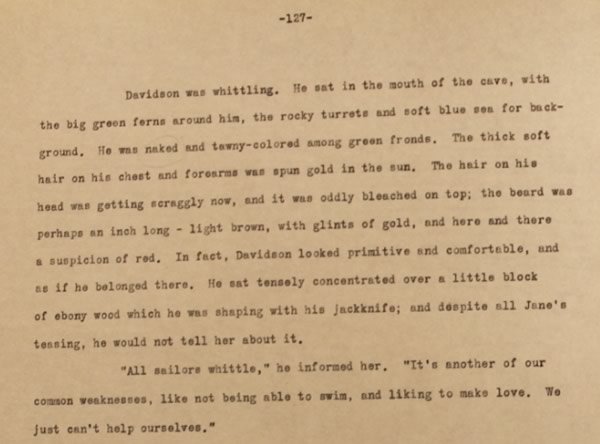 Davidson was whittling. He sat in the mouth of the cave, with the big green ferns around him, the rocky turrets and soft blue sea for background. He was naked and tawny-colored among green fronds. The thick soft hair on his chest and forearms was spun gold in the sun. The hair on his head was getting scraggly now, and it was oddly bleached on top; the beard was perhaps and inch long — light brown, with glints of gold, and here and there a suspicion of red. In fact, Davidson looked primitive and comfortable, and as if he belonged there. He sat tensely concentrated over a little block of ebony wood which he was shaping with his jackknife; and despite all Jane’s teasing, he would not tell her about it.

“All sailors whittle,” he informed her. “It’s another of our common weaknesses, like not being able to swim, and liking to make love. We just can’t help ourselves.”

“And you won’t tell me what it is?” she pleaded.

“If I told you what it’s going to be, it would turn out to be something else,” he protested.… Read more