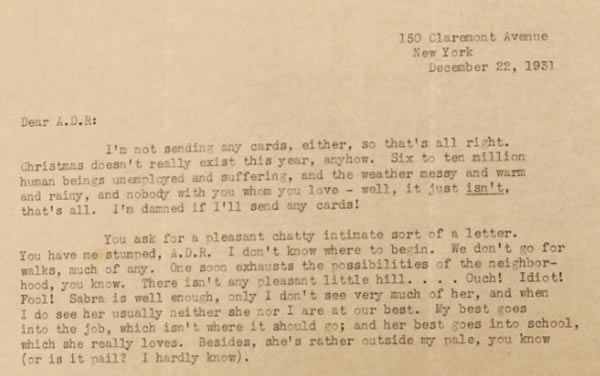 I’m not sending any cards, either, so that’s all right. Christmas doesn’t really exist this year, anyhow. Six to ten million human beings unemployed and suffering, and the weather messy and warm and rainy, and nobody with you whom you love—well, it just isn’t, that’s all. I’m damned if I’ll send any cards!

You ask for a pleasant chatty intimate sort of letter. You have me stumped, A.D.R. I don’t know where to begin. We don’t go for walks, much of any. One soon exhausts the possibilities of the neighborhood, you know. There isn’t any pleasant little hill…. Ouch! Idiot! Fool! Sabra is well enough, only I don’t see very much of her, and when I do see her usually neither she nor I are at our best. My best goes into the job, which isn’t where it should go; and her best goes into school, which she really loves. Besides, she’s rather outside my pale, you know (or is it pail? I hardly know).

I’m glad to hear the hopeful sound in your words when you mention B.R. Also it’s good to know that E. is writing. Painting? And how is the business-in-the-desert? Phoebe, I suppose, finds it difficult to see rhyme or reason. Well … don’t we all?

The book crawls along—crawls is just the word to describe its progress the last month or so. It’s about two people who found out the rhyme and reason for a little while, but had it snatched away again. It’s supposed to tear one’s heart, you know. If it doesn’t, a little, here and there, then it’s no good. Promise you’ll be torn, A.D.R? I may send you a copy of it before I show it to Messrs. Harper etc. I want to try to get a copy to E.A., you see, and perhaps I’ll ask him to send it to you, or you to him, or something like that.

He remains the best thing that I can see in life. (See???) It’s his steadiness and strength and complete trustworthiness that makes him stand out so, in a complicated and discouraged world. I won’t do any quotationing now, because I haven’t time, but sometime I will. In the meantime, oh, thank God I’ve got him!

I hear that H. is going to do something about your little serial in John Martin’s. I’ve glanced at it, and it really is adorable. Something ought to be doable about it, of course. I hope she’ll succeed. What are you writing now? Healthy things, always? Oh, well, I suppose we can’t afford to do the others until we make our fortunes first!

I want to see you, very much. Who knows? The world is fairly small, when all’s said and done, and I’ve an odd presentiment that I shan’t be sitting at this desk for more than a certain amount of time—another year, say. I don’t know what’s going to happen after that, but I just have a small, dim suspicion, that’s all. If the world has any justice (I never believed it had much), or a shred of happiness in it, or even the most erratic tendency to keep its promises—well, I shan’t, that’s all. And if that sounds vague and mysterious and so forth, it’s just because I don’t dare to do more than vaguely, dimly hint that things could take a sudden turn. (Sudden???) And if the world so much as suspected that I was in danger of telling you anything about its secret mechanisms, it would swoop down on me at once and cut off my head.

My love to all the fambly, and—no, I won’t say “Merry Christmas.” I don’t feel the faintest ray of that sort of sentiment, and there’s no use in cluttering up the air with it. But my greetings, anyway.

As for the poor Hoovers being crammed into art. Well, I don’t feel qualified to give many comments about that. However, perhaps this will give a clue. My new shorthand abbreviation for “article” is “art,” and oh, you, more than anyone in the world, will appreciate and see the irony of that! Especially with the dry, scientific, technical “arts” which are submitted to our little publication, the Personnel Journal!

Oh, yes, I do laugh now and then. In fact, I’m not honestly so gloomy as I sound. I’ve gotten into the habit, I think, of writing rather cynical letters lately. You will make due allowances. I probably say either more than I mean, or not as much.