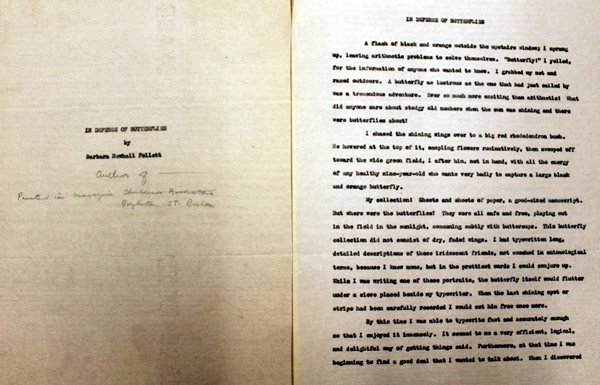 Published in the February, 1933, issue of The Horn Book Magazine

In Defense of Butterflies
by Barbara Newhall Follett

A flash of black and orange outside the upstairs window; I sprang up, leaving arithmetic problems to solve themselves. “Butterfly!” I yelled, for the information of anyone who wanted to know. I grabbed my net and raced outdoors. A butterfly as lustrous as the one that had just sailed by was a tremendous adventure. Ever so much more exciting than arithmetic! what did anyone care about stodgy old numbers when the sun was shining and there were butterflies about?

I chased the shining wings over to a big red rhododendron bush. He hovered at the top of it, sampling flowers ruminatively, then swooped off toward the wide green field, I after him, net in hand, with all the energy of any healthy nine-year-old who wants very badly to capture a large black and orange butterfly.

My collection! Sheets and sheets of paper, a good-sized manuscript. But where were the butterflies? They were all safe and free, playing out in the field in the sunlight, communing subtly with buttercups. This butterfly collection did not consist of dry, faded wings. I had typewritten long, detailed descriptions of these iridescent friends, not couched in entomological terms, because I knew none, but in the prettiest words I could conjure up. While I was writing one of these portraits, the butterfly itself would flutter under a sieve placed beside my typewriter. When the last shining spot or stripe had been carefully recorded I would set him free once more.

By this time I was able to typewrite fast and accurately enough so that I enjoyed it immensely. It seemed to me a very efficient, logical, and delightful way of getting things said. Furthermore, at that time I was beginning to find a good deal that I wanted to talk about. When I discovered beauty in bird-songs, apple-blossoms, music, sunsets (but chiefly butterflies), I yearned to put it into tangible form so that I could keep it, hold it, understand it. I wrote masses of stuff, about everything under the sun, just for the pleasure and relief it gave me. This relief I could not have had in any other way. Handwriting would have been out of the question at that time, except for an occasional painfully scrawled line or two.

My little battered “portable” grew to be my best friend–with the possible exception of the butterflies. It was a constant companion, and the most important thing in my life. When I was happy or sad, ecstatic or anxious, I flew to the typewriter and poured my heart to it. It produced thousands of letters for me. It ticked off small stories and snatches of verse. A good many yards of its black ribbon went for purely fanciful purposes–a prodigious waste of time, if one believes that time spent happily is ever wasted.

It gave me hours of good practice in descriptive writing. Beside the butterflies, I kept a collection of sunsets. I would sit ensconced at a west window with the typewriter, feeling very much in touch with cosmic affairs, and write about the changes in color and cloud shapes as they took place. New Hampshire woods in the summer were full of things to be described. No sooner did I see light breaking silver on wet leaves, a smooth little red lizard in green moss, or some of Mr. de la Mare’s fairies ducketing among wild flowers, than I could write–write joyously about it all. And I was very happy.

Eventually daydreams took the form of a story, which grew into a small book, “The House without Windows.” This was the first more or less permanent result of the thousands of words I had typed since I was four years old. I don’t know anything about the importance of this story, in a literary sense; but it was important to me in that I had a great deal of fun writing it, editing, reading it in actual, honest-to-goodness galley proof, and eventually seeing it bound and sent out mysteriously into the world. (All this was in the happy, happy days before I awoke to learn that good writing does not flow like a singing brook, but must be hammered and beaten drop by drop from the heart’s blood!)

But beside daydreams and butterflies, the typewriter recorded faithfully actual events, such as mountain trips, canoe trips–thus taking the place of drawing or photography. From a ten-day voyage in a three-masted schooner, another small book was created, “The Voyage of the Norman D.” And of course, when my mother and I sailed on our very romantic roamings about the West Indies and the South Seas, our typewriters were our most important articles of baggage. As a matter of fact, they took the place of pocket-books!

I do not mean to imply that these two books were the most important result of my having learned to typewrite, or of my desire to write intensely about whatever entered my head. I should feel the same about the importance of the typewriter even if I had never written as much as a single word that would be permanent.

Too many people have for too long thought of the typewriter as an instrument or purely commercial value. I want to stress the point that for me that was the least of its values. It was not until after twelve years of intimate association with it that i made any use of its commercial value in an office. And this seemed decidedly a more tawdry use of its magic. Its beauty for me lay in the fact that it gave me a way to talk, to describe butterflies fluently and neatly–a way to keep my butterflies without putting pins through their shimmering wings.

I was gloriously free to talk about whatever I wished, whatever I considered important or beautiful. So I began to explore fare and wide in search of still more beauty which I could set down and make my own. I thought about flowers, and learned their names. I watched leaves and light, water and clouds more carefully. I listened for familiar bird-songs. I became acquainted with ferns and mosses, small flickering fishes in the lake, squirrels and chipmunks rustling the leaves. My typewriter was the efficient medium through which I poured out a young adoration of nature.

And then, somehow, the whole thing broke. I no longer could rattle off pages about anything that interested me. Writing began to involve an anguish of concentration, word by word production, revision, much rewriting and rearranging. The spontaneity and fluency were lost for me on the day I longed for sentences to be more perfect, words better chosen, paragraphs more artistically put together. I set for myself a standard which I was never able to reach. I should never again be able to sit down casually and innocently beside a sieve to describe a butterfly. I was gradually growing up, and it wasn’t much fun. It made the writing problem all of a sudden strangely complex and difficult.

But even now the typewriter did not fail me. It patiently limped back and forth across the pages with me. It was made to retrace its steps, to cross out words it had labored over, two write between the lines. Often an unfinished page would be torn from it impatiently, and we would have to start all over. And it very seldom lost its temper!

Sometimes, when I am in the throes of wrestling some beastly paragraph, I stop and sigh for the days when I could put words together as fast as my fingers could tap the keys. And I’m ore and more positive that having a typewriter during all that time was the best thing that could have happened to me. I have often wondered what would happen if every child of four were given a typewriter to work and play with. Knowing nothing about education or psychology or children of four, I couldn’t even venture a guess. Perhaps there would simply be a terrific wholesale destruction of typewriters. An effort would have to be made to impress upon children that a typewriter is magic, and a thing to be handled with gentle reverence. But seriously, I wonder if any child in the world would  not find his life more full of meaning and of beauty, if he could have at his command a means of setting down the things he feels and enjoys.

Once I attended for a short time an up-to-date business school. I was rather dismayed when I saw how typewriting was being taught. It was terrifying to look at rows and rows of big belligerent business typewriters, without a single letter on a single key–blank, mute, expressionless. You knew, theoretically, where the letters were. You didn’t look at the keyboard anyhow. This, along with many charts on the wall, dreary exercise books, etc., constituted the modern “touch” system. Learning to typewrite was a matter of hard work and deadly earnest.

I smiled as I remembered how I had learned to typewrite. I hadn’t even known the letters of the alphabet for very long at that time. I could spell only a few simple words. Hands were so very insignificant that only the forefingers were strong enough to stand the strain of tapping typewriter keys. I began by writing my favorite words, notable “butterfly” and “clock.” Gradually, of course, I learned the proper fingering, and developed familiarity with the keyboard. But at no time was the typewriter a matter of dull, deadly drudgery and practice; it was never less than sheer delightful magic.

I should think, then, that the earlier a child can learn to handle a typewriter, the better. At seven or eight years old, the enchantment of butterflies (using the word now as a symbol of anything and everything) begins to come with a wild rush. With a typewriter, something can be done about it. Those first young appreciations of beauty can be cared for and made to grow, instead of being forced to fend for themselves in silence and perhaps to grow dim or fade out altogether.

Just what use now are all those pages of nature-worship I wrote long ago? I cannot answer that for sure, but I venture the suspicion that such things as leaves and flowers, mountains and rivers, and especially butterflies, mean very much more to me know that they would have meant if I had been forced, through lack of a proper tool, into mere passive acceptance. I should not, perhaps, been lured out over the fields in pursuit of brighter and rarer butterflies, had I not known that it was in my power to make them forever my own–immortal, as it were. And I imagine that the same holds true for many other things. This seems to hint at the rather momentous conclusion that perhaps all of life has for me been subtly affected, brightened, because it was never dammed up and forgotten, but given a constant outlet and stimulation through that little old “portable” or mine. Life was a running brook, instead of a tranquil pool. And if this is true of me, why not of others?

Perhaps this is a mere fanciful theory, which any educational expert would at once disprove. Anyway, I still like butterflies. And–but don’t tell anyone–I still don’t know their Latin names. I doubt very much if they need Latin names.

2 Replies to “In Defense of Butterflies”