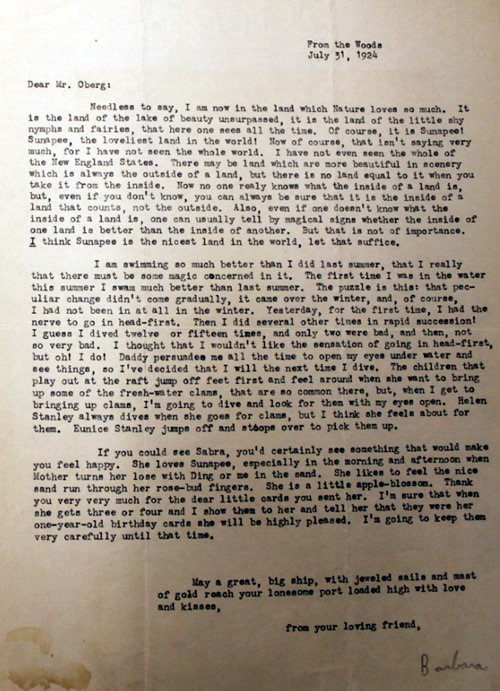 Needless to say, I am now in the land which Nature loves so much. It is the land of the lake of beauty unsurpassed, it is the land of the little shy nymphs and fairies, that here one sees all the time. Of course, it is Sunapee! Sunapee, the loveliest land in the world! Now of course, that isn’t saying very much, for I have not seen the whole world. I have not even seen the whole of the New England States. There may be lands which are more beautiful in scenery which is always the outside of a land, but there is no land equal to it when you take it from the inside. Now no one really knows what the inside of a land is, but, even if you don’t know, you can always be sure that it is the inside of a land that counts, not the outside. Also, even if one doesn’t know what the inside of a land is, one can usually tell by magical signs whether the inside of one land is better than the inside of another. But that is not of importance. I think Sunapee is the nicest land in the world, let that suffice.

I am swimming so much better than I did last summer, that I really [think] that there must be some magic concerned in it. The first time I was in the water this summer I swam much better than last summer. The puzzle is this: that peculiar change didn’t come gradually, it came over the winter, and, of course, I had not been in at all in the winter. Yesterday, for the first time, I had the nerve to go in head-first. Then I did several other times in rapid succession! I guess I dived twelve or fifteen times, and only two were bad, and then, not so very bad. I thought that I wouldn’t like the sensation of going in head-first, but oh! I do! Daddy persuaded me all the time to open my eyes under water and see things, so I’ve decided that I will the next time I dive. The children that play out at the raft jump off feet first and feel around when [they] want to bring up some of the fresh-water clams, that are so common there, but, when I get to bringing up clams, I’m going to dive and look for them with my eyes open. Helen Stanley always dives when she goes for clams, but I think she feels about for them. Eunice Stanley jumps off and stoops over to pick them up.

If you could see Sabra, you’d certainly see something that would make you feel happy. She loves Sunapee, especially in the morning and afternoon when Mother turns her loose with Ding or me in the sand. She likes to feel the nice sand run through her rose-bud fingers. She is a little apple-blossom. Thank you very very much for the dear little cards you sent her. I’m sure that when she gets three or four and I show them to her and tell her that they were her one-year-old birthday cards she will be highly pleased. I’m going to keep them very carefully until that time.

May a great, big ship, with jeweled sails and mast of gold reach your lonesome port loaded high with love and kisses,

from your loving friend,
Barbara