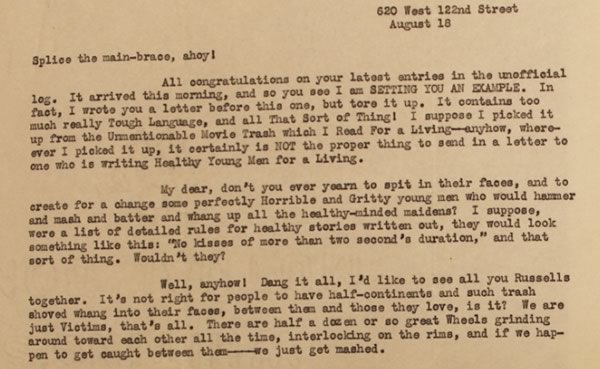 All congratulations on your latest entries in the unofficial log. It arrived this morning, and so you see I am SETTING YOU AN EXAMPLE. In fact, I wrote you a letter before this one, but tore it up. It contains too much really Tough Language, and all That Sort of Thing! I suppose I picked it up form the Unmentionable Movie Trash which I Read For a Living–anyhow, where-ever I picked it up, it certainly is NOT the proper thing to send in a letter to one who is writing Healthy Young Men for a Living.

My dear, don’t you ever yearn to spit in their faces, and to create for a change some perfectly Horrible and Gritty young men who would hammer and mash and batter and whang up all the healthy-minded maidens?  I suppose, were a list of detailed rules for healthy stories written out, they would look something like this: “No kisses of more than two second’s duration,” and that sort of thing. Wouldn’t they?

Well, anyhow! Dang it all, I’d like to see all you Russells together. It’s not right for people to have half-continents and such trash shoved whang into their faces, between them and those they love, is it? We are just Victims, that’s all. There are half a dozen or so great Wheels grinding around toward each other all the time, interlocking on the rims, and if we happen to get caught between them—–we just get mashed.

Many red devils ran from my heart
And out upon the page,
They were so tiny
The pen could mash them,
And many struggled in the ink.
It was strange
To write in this red muck
Of things from my heart.
Stephen Crane.

I wish I had some GOOD news for you! Alas! I am fairly busy over my eighteen-a-week (more-or-less). I have a fairly regular round of housework, synopsisses, tipe-riting, an’ a’ that. My sole pastime, so far, consists of walking along the river-bank park in the evenings after dark–“to mark, wi’ envy in my gaze, the couples kittlin’ in the dark between the funnel-stays.” (If only there were some funnel-stays! Alas!) Helen’s Manuscript is less and less sold all the time. Sabra is still at camp. Finances become lower and lower. You can’t live–here–on my salary–though I daresay I could alone. And to think that I’m the only one of the family who has a “yob!” That tickles my sense of humor fine!

My sense of humor has had more and more heavy responsibilities of late. I really need fuel for it–fresh fuel from the outside. However, I can say very truthfully that it has never yet failed me, and it isn’t going to either . . . . Leo Mayette (have I told you anything of him?) and his wife, and his brother, and his sister, have all been here for a while, but now they have departed for New Hampshire and the old home-farm again. It was a delight to have them here. Leo, in particular, is really one of the greatest persons in the world, as well as one of the very simplest and humblest.

Have you Seen or Heard anything of the Farents? I confess to a mild sort of curiosity. I suppose I should write to them, but–oh my, oh my! You see, I feel that if I can stick out this particular present-minute, present-place situation, and get on top of it, and yammer at it, and smash it, and domineer over it, and be Snooty and Disagreeable to it, and Awe it, and just make it Cringe–why, then, I guess I’m doing all I have room for. And I am doing just that. So picture yourself an Amazon, mounted upon a Bucking Elephant, and hammering that elephant over the head with a Fijian war-club.

Anyway, there’s a picture of Joseph Conrad over this table ….

And NOTHING can daunt me!

And Joseph Conrad sent me his blessing and his love. Not so very long ago.

And Anderson comes home in October.

Lots of things have Occurred to Me, anyhow. I think I’m ready to live a much happier sort of life from now on–I mean, to make the best of circumstances and of myself, and get a lot of pleasure and fun out of anything and everything. I wish poor Helen could do that as effectively as I have learned to do it. She hasn’t. She’s under water. God! And I can’t rescue her. I do forty-nine fiftieths of everything that is done at No. 122, as it is; and I sing as I do it: “I got a home in-a dat rock, Don’t you see?”

And in October, Anderson comes home. And I’ll have that fresh fuel for my S. of H. Besides, I may earn a whang on the back from him, and that’s worth anything.

But I want all the Russells to be together. And why must Phoebe go to school, with her scientific father to superintend her? I think school is really and primarily a place for children whose parents are banging each other over the head with rolling-pins, or whose parents are absolute morons, and whose parents are both slaving at outside work for a living, or for children reared in utter poverty and misery. (This is not supposed to cast any reflections of any kind upon the Russells, I hope you understand!) But rainbows shouldn’t be stuffed into sofa-cushions, should they?