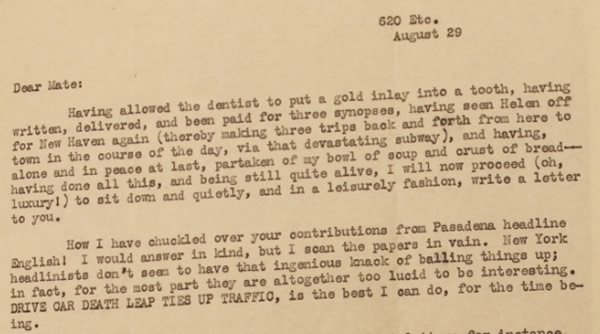 Having allowed the dentist to put a gold inlay into a tooth, having written, delivered, and been paid for three synopses, having seen Helen off for New Haven again (thereby making three trips back and forth from here to town in the course of the day, via that devastating subway), and having, alone and in peace at last, partaken of my bowl of soup and crust of bread–having done all this, and being still quite alive, I will now proceed (oh, luxury!) to sit down and quietly, and in leisurely fashion, write a letter to you.

How I have chuckled over your contributions from Pasadena headline English! I would answer in kind, but I scan the papers in vain. New York headlinists don’t seem to have that ingenious knack of balling things up; in fact, for the most part they are altogether too lucid to be interesting. DRIVE CAR DEATH LEAP TIES UP TRAFFIC, is the best I can do, for the time being.

Dash it all, now that I’ve really sat down–after three days of trying to–there doesn’t seem to be anything more to say than there was last time or the time before, and one shouldn’t repeat oneself. School begins again next Tuesday. Thank God I can pay for it–the whole thing. I can also pay my own dentist bills, and buy my own clothes, and my own amusements and necessities. That’s more than I was ever able to do before; and I can tell you, it makes me feel quite uppity when I go sailing into that Fox office on Broadway and receive my weekly pay envelope!

Helen is rather desperate. I don’t know what to do about her, at all, at all. It makes her feel rather badly to think that I have a job and she hasn’t; it struck her hard that her MS didn’t sell with a bang; and as for finances–well, I don’t know where the rent comes from. She is always so secretive about those things, and she’s such a fool, really, when it comes to money and Practical Things. When I say “Fool,” I don’t mean it harshly, you understand. I guess you know what I mean as well as I do, anyway.

She has gone down to New Haven now, to mull over the house, and get it ready for renting. She is kind of wild here, because there’s a steam-derrick half a block away going all day, and making a fearsome racket. My typewriter goes too much for her nerves, too; but I don’t see how that can be helped. I’m hoping she’ll find some quiet in New Haven for a few days now, just as I’m finding peace here alone. When she comes again, Sabra will be with her.

Well, what next? I’m fairly contented, and have a rather pleasant sort of curiosity about the future. It can’t fail to be interesting! I think the masculine farent should be whanged on the head and wake up to find himself shanghaied to sea; and I think the feminine farent should tackle the first job she can light on. He isn’t what you’d call a Man. He isn’t half the man that some of the Dago workmen are down the street. He isn’t halfway the man that Mate Bill is, or Cap’n Colbeth, or Anderson. He should go to work and do some hard physical labor, under someone who can’t be talked back to, and who doesn’t care a damn for all the long words. Nothing could be better for him than to take a trip in the Vigilant, under old Captain Peasley, and first mate Jacobsen. Jove! He’d “yump” around then, all right!

Yes! I have some news for you. I went and saw The Green Pastures. It is the loveliest, and most real, and simple, touching, glorious play I ever knew. Marc Connelly’s negro play, you know. It interprets the negro’s simple belief and religion. Lord God Jehovah is exactly like some kindly old white-haired preacher: he has a little office up in Heaven, and every morning two angels, with dust-covers over their wings, come in and dust it.  The whole story is there from the beginning–Adam and Eve, Noah and the Ark, Moses, the pilgrims on their way to Canaan; and all through it the choir sings negro spirituals, most of them familiar–and you get to the point before long when you just want to lie down and weep.

Speaking of weeping: the steam-derrick which makes such a racket down the street here is doing a job for a company which calls itself The House-Wrecking Company. If that ain’t the limit!…

[in pen] I just received a letter from Detroit, enclosing E.’s masterpiece. Oh, I do so hope you’ll all manage to get away together on some gorgeous Exposition before long!