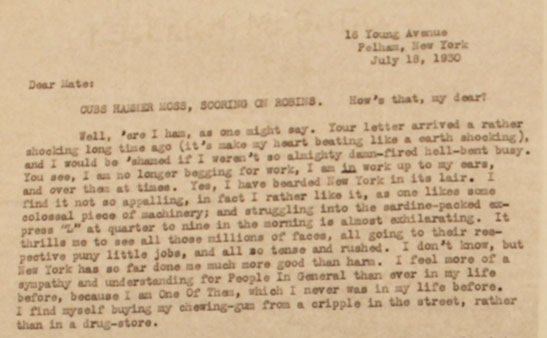 CUBS HAMMER MOSS, SCORING ON ROBINS. How’s that, my dear?

Well, ‘ere I ham, as one might say. Your letter arrived a rather shocking long time ago (it’s make my heart beating like a earth shocking), and I would be ‘shamed if I weren’t so almighty damn-fired hell-bent busy. You see, I am no longer begging for work, I am in work up to my ears, and over them at times. Yes, I have bearded New York in its lair. I find it not so appalling, in fact I rather like it, as one likes some colossal piece of machinery; and struggling into the sardine-packed express “L” at quarter to nine in the morning is almost exhilarating. It thrills me to see all those millions of faces, all going to their respective puny jobs, and all so tense and rushed. I don’t know, but New York has so far done me much more good than harm. I feel more of a sympathy and understanding for People In General than ever in my life before, because I am One Of Them, which I never was in my life before. I find myself buying my chewing-gum from a cripple in the street, rather than in a drug-store.

Yes, I long and long and long for the sea, and woods, and quiet, and more sunshine, and the wind, and a little more room, please, and not so many people on my feet, if you don’t mind. And there are times when I feel my heart beginning to curl up just a little at the edges–the first step, the warning symptom, to its sickening and dwindling. I keep holding out my arms–I mean my spiritual arms–like an amoeba or sumthin. A ceaseless need. Sometimes I think it’s the sea, and sometimes I think it’s Anderson’s correspondence, and sometimes I think it’s just space I need, and the wild. And I can’t have ’em!

You see, I am now taking a course at the Packard Commercial School, and studying shorthand with might and main. Already I have caught up to the class which started two weeks ahead of me, and I’ve only been there five days! You see, a really good and intelligent stenographer and typist can always get some sort of a job, while there’s damn little chance for an inexperienced nothing-in-particular, as I am. I really am having a fine time at the school. The teachers are good souls, both of them, and it is as fine a bunch of young womanhood as I ever set eyes on–those girls.

I am also writing synopses for Fox, at six dollars apiece, which is fun. Then, too, occasionally someone drops a bulky MS into my lap and says: “Here! I’ll give you five dollars for your opinion on this, expressed in two pages.” That’s a tribute to one’s critical sense, ain’t it? Furthermore, it’s pin-money–lunches and stockings and tooth-paste and what-not.

About Sabra. Please don’t let your imagination go running away with you, or I’ll die. You know, after all, she is only a little, little girl. It was almost a terrible experience, if you want the real truth. I rushed to her with my heart wide open, and my soul ready for the balm I felt she’d give–and the beautiful dream melted, and I found a little child–a darling little child, to be sure–who took all I could give, and gave almost nothing in return, because she could not, of course, and I was ridiculous to expect it of her, but expect it I did. She could not fill any need of mine–not the need I thought she could fill, that is, but something entirely different that hasn’t got oriented yet; and the other need, the greater one, is still hungry. And it’s dying now. You can’t keep anything hungry forever, without eventually just starving it to its death. There is a limit.

Well, just what will happen I don’t know. I have been in New Haven a good deal, slaving away in the attic of No. 176. It’s fascinating! Sorting out books, and junk–amazing junk! I’ve pretty well worked things out. You know, we’ve rented an apartment in the city, and we’re moving into it the first of August, and we stay there until June, 1931, at least. At that date the building is going to be torn down, so I suppose we may just conceivably have to clear out. And I think it’s lucky. Otherwise we might become appallingly rooted there.

So far my life seems to be nothing better than a mess, so far as the future is concerned. I have to work, that’s certain, and if I get a regular job I’ll have to stay with it, and that means–well, it means just what I’m having now, more or less. I have to heave a sigh at times. Sometimes I even get very morbid and decide that I’ll marry the first person who offers a chance to get out of it. And then sometimes I change my mind. I don’t know. Anderson informs me that dreams have to be put away on the shelf occasionally–usually, he should have said! New York, New York.  Two weeks vacation. Slaving for your salt and matches and tooth-paste, and your cup of soup and crumb of hard-tack. I always swore I would never get into the “mood” about it all, but I seem to at times in spite of myself.

But don’t mistake me. When I’m busy–and I am busy–I am really happy, you know. I don’t have much tie to sit down and think, and I guess that’s lucky. I haven’t any time but for the ten-of-eight train in the morning, the 3rd Avenue express, the Packard School, lunch, afternoon business, the trains again, supper, Amos ‘n’ Andy, work, bed, and the ten-of-eight in the morning again. I meant to go down to New Haven over this week-end, but the prospect of two quiet days in the “timid little house” was too tempting to resist. I meant to go down to Baltimore when the Marsodak came in last trip, but didn’t. I mean to go to N. H. next week, but probably shan’t. I also mean to go to Baltimore next trip, but really I can’t possibly. I also meant to write and do Farksoo, but somehow I keep missing the mark. My nose is shackled to the grindstone! I never can lift my head to get a peek at the blue sky!

And you–you are a grand, gorgeous soul, and I am with you more than you know. And I’m glad you agree with me about the cocked hats.

P. S. The house is getting ready to be sold now. Helen and Sabra are living there. I was to stay there too until August 1, but joined the school instead. You can imagine how that flabbergasted Helen, who had counted on my staying down there and helping out. But I figgered that I would be a coward either way, and so I took what I guess was the severest course after all!

Russian looks to me worse than Gregg shorthand, and not nearly so convenient!