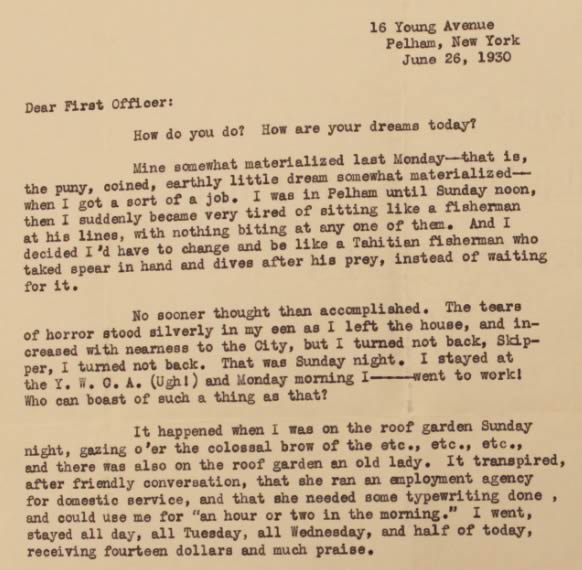 How do you do? How are your dreams today?

Mine somewhat materialized last Monday–that is, the puny coined, earthly little dream somewhat materialized–when I got a sort of a job. I was in Pelham until Sunday noon, then I suddenly became very tired of sitting like a fisherman at his lines, with nothing biting at any one of them. And I decided I’d have to change and be like a Tahitian fisherman who taked spear in hand and dives after his prey, instead of waiting for it.

No sooner thought than accomplished. The tears of horror stood silverly in my een as I left the house, and increased with nearness to the City, but I turned not back, Skipper, I turned not back. That was Sunday night. I stayed at the Y. W. C. A. (Ugh!) and Monday morning I—–went to work! Who can boast of such a thing as that?

It happened when I was on the roof garden Sunday night, gazing o’er the colossal brow of the etc., etc., etc., and there was also on the roof garden an old lady. It transpired, after friendly conversation, that she ran an employment agency for domestic service, and that she needed some typewriting done, and could use me for “an hour or two in the morning.” I went, stayed all day, all Tuesday, all Wednesday, and half of today, receiving fourteen dollars and much praise.

The Great Trouble, though, is that I am now “laid off”–oh, the horror of those two words!–for the regular girl, who had been out, comes back next week. So that’s that. Now I’m going back to Pelham to spend the week-end; and that’s always my mail address, for they will forward anything anywhere.

I’ve read all of Barrie’s plays, now, and wish there were hundreds more. But “Dear Brutus” is more gorgeous than the island one, “Mary Rose.”

I haven’t seen a picture of Masefield for a long time, and I don’t know whether you’re right or not. I’ll look it up someday.

Follett did something about the house, I don’t know just what. It belongs to Helen now, debts and all. She’s been in N. H., seen Sabra, slept in the house, had a Hell of a time, and pulled through very well, in spite of a horrible row with Dr. Tyler which was humiliating and irritating to all of us. I shall see Sabra next Monday. Helen is going to bring her to New York to have her see someone at the Lincoln School. We want to get an unfurnished apartment near the school, move down some of our stuff, and Get Settled. Sounds simple, doesn’t it? Yes, I know it does.

The Farents can g- t- H—, if you know what I mean; I won’t think about them yet awhile. You have my devoted sympathy, however, as you know; and you have it every time you see them–so when you do see them, remember that my sympathy is floating around somewhere in the atmosphere. I’ll lay up a “special fund” of it for that very purpose.

I wish one of you were Here, so that I’d have a real kindred spirit close by. I need one! Correspondence is as inadequate as clouds are to a parched country longing for rain–I mean, when the clouds just drift away overhead and perform nothing! I wish Anderson were around, failing yourself. However, it is doubtless magnificent training for me not to have the people I want and care for, but to be forced to stand on my own pins, mentally and emotionally speaking.

Helen’s MS is in the hands of agent who talk a great deal. Via them it is in the hands of Collier’s. I’d like to report a two-thousand-dollar check–but, alas, am unable to do so at this sitting! Helen’s address is many and various. The best guess, I reckon, is c/o Dr. Margaret Tyler, 75 Mansfield St., New Haven, Conn. I don’t guarantee it, though. By the way, Helen says she wants you more than she ever has, and she sends you her greatest love. That woman is–well, what she is going through isn’t even printable, and only a deep-sea sailor could even begin to hint at it.

You ask slyly and subtly and cautiously about Dr. Paul. You’ve asked so very cautiously, in fact, that I don’t exactly understand what it is you’re asking about him. You needn’t be so Extremely Reserved with me, you know! I don’t give a puff of wind for Dr. Paul, one way or another, if that’s what you want to know. Helen got banged up, some, but she’s getting over it. Her knowledge of his attentions to me (which are probably lighter than thistle-down, I’m not sure) has waked her up with a whang to what sort of a juggler he really is. So I guess that’s all right, especially as he’s going to Spitsbergen or Lapadaeczvia or somewhere, and can’t be even written to for a year.

The more I see of everybody in general, the more I know that there are a few simple, quiet souls (like Anderson) who unconsciously and entirely unmaliciously knock everyone else into so many bedraggled cocked hats.

Yours for aye,
Barbara.