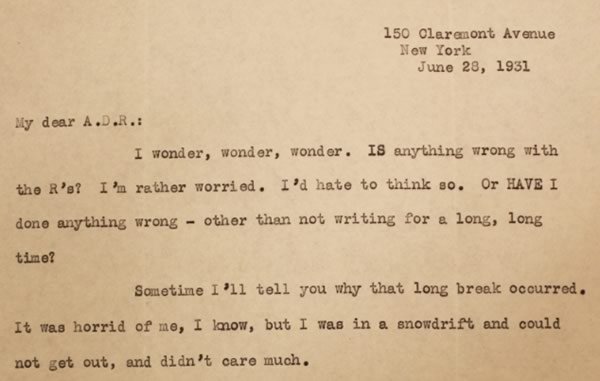 Sometime I’ll tell you why that long break occurred. It was horrid of me, I know, but I was in a snowdrift and could not get out, and didn’t care much.

Or maybe that last letter of mine went wrong—in which I told you about Helen’s book and Macmillan’s acceptance of it; and also of my projected book, of which three chapters are now in existence. Maybe that letter smashed in an airplane or sumthin.

Anyway, I do want to hear from you — ever so. About how you all are. I suppose B. R. has been west by this time, hasn’t he? Or did something slip up there? I am rather worried. I do hope that everything’s well with you and yours.

My love and Helen’s to Phoebe, et al., and plenty left over for yourself.

P.S. If it is true that that letter didn’t reach you, please don’t say a word about this to anyone. W. F. mustn’t know — yet!