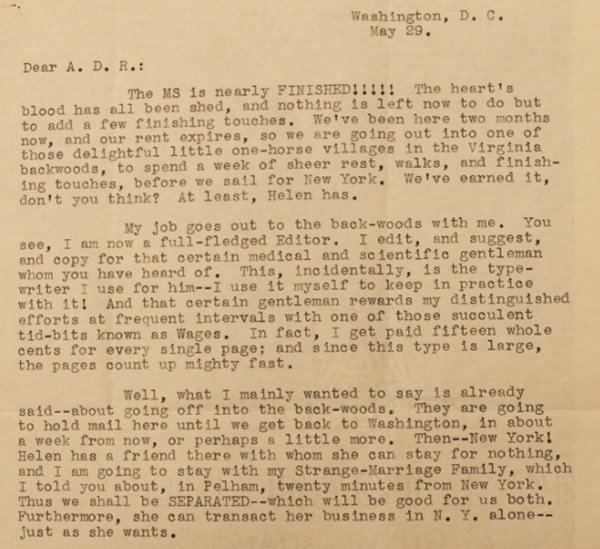 The MS is nearly FINISHED!!!!! The heart’s blood has all been shed, and nothing is left now to do but to add a few finishing touches. We’ve been here two months now, and our rent expires, so we are going out into one of those delightful little one-horse villages in the Virginia backwoods, to spend a week of sheer rest, walks, and finishing touches, before we sail for New York. We’ve earned it, don’t you think? At least, Helen has.

My job goes out to the back-woods with me. You see, I am now a full-fledged Editor. I edit, and suggest, and copy for that certain medical and scientific gentleman whom you have heard of. This, incidentally, is the typewriter I use  for him–I use it myself to keep in practice with it! And that certain gentleman rewards my distinguished efforts at frequent intervals with one of those succulent tid-bits knows as Wages. In fact, I get paid fifteen whole cents for every single page; and since this type is large, the pages count up mighty fast.

Well, what I mainly wanted to say is already said–about going off into the back-woods. They are going to hold mail here until we get back to Washington, in about a week from now, or perhaps a little more. Then–New York! Helen has a friend there with whom she can stay for nothing, and I am going to stay with my Strange-Marriage Family, which I told you about, in Pelham, twenty minutes from New York. Thus we shall be SEPARATED–which will be good for us both. Furthermore, she can transact her business in N. Y. alone–just as she wants.

Then I’m going after a job. I made a definite determination that by June 15th I was either going to have one or a definite prospect for one. I have a vague feeling that Harper may land me in his Bookshop–especially if he likes the MS. Then there is Percy Waxman, Helen’s friend at Pictorial, and there is always A. A. Knopf. I am one of his authors, and he is almost bound to do something for me if necessary, though that is the last resource–as I despise the place, the chilly, rapid-fire efficient business money-atmosphere of the place. There is also a Jew by name Goldsilver or something of the sort, a friend of a friend of ours, a wealthy and influential person, who might help.

I’ve been into the Civil Service Commission here, but that’s definitely out. If I live to be forty-nine, and am still an old maid, I’ll consider it–not until then! Anyway, I have a fancy that New York will do something, it being so tremendous and–oh, well, there’s no adjective for it. In New York, the first few days, it takes the whole set of a human being’s faculties just to keep his head through the uproar. But one improves with a little time.

Anderson sailed on the 16th, as per schedule, sailed right out into space. Look up Point Barrow on a map of the Arctic regions–that’s the end of the route–then they turn around again and circle Alaska toward home–if they don’t encounter a nor’-easter, or an iceberg, or the pack-ice. Before they sailed he sent off one dashing letter, or quite a different tone from what you’d expect of a person embarking on such a mean voyage. He described his own particular position aboard, half-way between sailor and engineer (there are four gasoline engines for sails and cargo, you see); and then he wrote several ages in mocking echo of the “tourist literature” on Seattle, concerning statistics and what-not. And then he seemed to run out of material, and said “Well, goodbye!” or words to that effect. A person like that sort of takes one’s breath away, seems to me. Very startling and over-powering.

Farksoo progresseth, even with everything else that is on hand. I improve it every time I take out the MS and breathe gently on it. Sometimes I arise at six in the morning and gloat triumphantly over it. I’ve combined the two vocabularys (ies, I mean!) into one, Farksoo and English all mixed. It’s much better that way; and the Grammar develops magnifiquement.

How is The Exception? And the Devil’s Limb? And the Other One? And Thyself? It seems a very long time–almost a kickworthy long time–since I heard from you! Maybe there’ll be a Royal-typed letter awaiting me when I come back our retreat in the woods.

We have seen the Pratts, and spent a most glorious day at Capitol View with them. I think those woods are too beautiful to be true–oh, how well they satisfy the hunger of one who has spent a year and a half away from New England! Pinkish bronze oaks, gold-green maples in the sunlight, dogwood and red-bud flowering…. And I saw the quarry pool, and the daffodils growing wild on your lawn, Shipmate. And the apples and lilacs were flowering, then, and there were violets and spring beauties everywhere. And Phoebe’s bench is still up there in the branches of the enormous old cherry-tree.

But this won’t do, in this curious old world of ours! Anyway, here’s a whole steamer’s cargo of love to you.