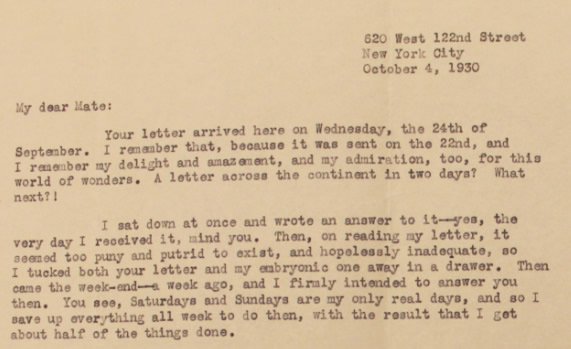 Your letter arrived here on Wednesday, the 24th of September. I remember that, because it was sent on the 22nd, and I remember my delight and amazement, and my admiration, too, for this world of wonders. A letter across the continent in two days? What next?!

I sat down at once and wrote an answer to it–yes, the very day I received it, mind you. Then, on reading my letter, it seemed too puny and putrid to exist, and hopelessly inadequate, so I tucked both your letter and my embryonic one away in a drawer. Then came the week-end–a week ago, and I firmly intended to answer you then. You see, Saturdays and Sundays are my only real days, and so I save up everything all week to do then, with the result that I get about half of the things done.

Well, I thought so very much about your letter, and my answer to it, that I thought myself into a state of believing that I had answered it, and it didn’t really occur to me until this morning that I hadn’t, and that my embryo was still lying in a drawer. You don’t know (yes, I guess you do, though) what a day–a week–is like in New York C I T Y (as our friend Leo Meyette always writes it on envelopes!).

Now whatever I was going to say has entirely slipped me, so I’ll begin over, having all day to do it in–that is, if I neglect my washing, and the meals, and my week-end home-work, etc., etc., etc., which I intend to do if I desire.

Your headlines are very juicy. Of the four I deciphered one–the one about the icy doom stilling the heart, don’t you know, and the record thrust within clothing. I suppose that was eventually intelligible to me only because I have been following, off and on, the tragic discoveries in the Arctic. Speaking of the Arctic: the other day my red hair was made to rise stiffly on end (like quills, etc.) by seeing a little piece in the Tribune about an air-plane which effected a rescue of the crew of a trading-ship somewhere north of Alaska–a ship owned by the Seattle Fur Trading Company. My high pitch of excitement (to put it mildly) did not abate even when I learned that the ship was a motorship, with a name which not even a newspaper reporter could have confused with my C. S. Holmes.

Imagine Phoebe studying punctuation and grammar! The funny part of that is that I, also, am studying punctuation and grammar. At the commercial school whose walls enfold me half of every week-day, they require one to take a little subject known as “business correspondence”–more briefly, “correspondence.” This embraces spelling  (such words as “separate” and “February,” and others that Anderson would laugh at), also grammar (such things as the “can” and “may” hitch, etc.). Apart from this it is quite interesting, and I think I am getting something out of it–although some of my friends would doubtless say that what I mostly need is not a correspondence course, but a hush-up course.

But this is a mere digression. What I started to say in the paragraph above this one is that Phoebe is a brick of the best no. A1 material. Isn’t it disgusting–how Things Are? Degrees and credits——bah! To sweat for one’s shelter, clothing, and bread! Ye Gods, let’s go to Tahiti. I like, and I don’t like, to think of Phoebe in school. It isn’t right, and yet it’s marvellous of her to be attacking her dragon by the hind legs and pinning him down.

There is school, and there is school. Sabra seems to be enjoying hers terrifically. She is happy as can be–comes out at one o’clock hopping and prancing and singing. She learns cooking, and handicraft, including carpentry, painting, etc.–really they show a great deal of imagination and skill down there. The children mess around with smocks on, make as much noise as they like (within reasonable bounds, of course), do more or less what they like. As you perhaps know, this Lincoln School is a so-called “progressive school.” That means that children are not “sat on” or “squshed,” or boomeranged with “mustn’ts” and “don’ts” and “be quiets.” Which is an extremely good plan–for that tender age, at least.

“Green Pastures” is easily the most tremendous thing, in a dramatic line, that I’ve ever seen or heard of. I think it beats–for effect and appeal to one’s innermost vitals–Hamlet, or R. and J., or any of the old stand-bys. Is this a literary sacrilege? Well, I can’t help it if it is. When Jehovah (a kindly, fatherly old preacher in a frock-coat) produced the firmament in a terrific thunder-clap, I wept and wept. I don’t know why. They have staged it to perfection. The thunder shakes the theatre. They have a real sea for the Ark, and a long sandy stretch of road along which God walks for miles, it seems, while bushes and trees and houses float past. It is a rolling platform, of course, but one gets the effect of walking forever and ever, and before the end of it comes everyone aches from head to foot, so real it is. I suppose someday the play will leave New York, don’t you? If it ever gets within reach of you ——— well, I guess you don’t need any advice on the subject.

Such things are—-what’s the plural of oasis?—-oases, I suppose, though it doesn’t look right. They are—-that—-in a desert of grindstones, inhabited only by dragons with scalesome, flailsome tails. Isn’t that a picture? I bet Phoebe could draw it admirably. Get her to try her hand at it, if it appeals to her. The dragons would be something like Kipling’s Bi-Colored-Python-Rock-Snake, I imagine.

I have set aside a few days around the middle of this month–marked them off mentally with red ink–for the days during which I may hear from my wandering sailor. Of course one can’t tell–I might hear tomorrow, or I might never at all. Rather uncomfortable suspense. I don’t know quite what would happen to me in that case, and I don’t care to speculate. If I don’t hear before November, I shall be worried. I haven’t many bulwarks. My family isn’t a bulwark at all. You are, and he is. He is so simple at heart that he would be laughed at by some of this world, and distrusted by most of the rest–my farents, for example–my fermenting farents. He is the soul and essence of the sea. He can sit on a schooner’s taffrail at night and become so utterly a part of the ship and the sea and the night that it makes you cease your breathing for awe. He is rugged and uncut, and, though so far above the standard of most sea-farers, he still falls far short, in some ways, of the shore-world’s standards. He is ignorant–of the little things that don’t matter. But he is so real that he puts to shame thousands of people who probably would consider themselves far “above” him.

And he answered a need of mine that nothing and no one else could answer, by knowing how to laugh, and by being serene and tranquil and deep as the trade-wind Pacific. Bulwark, oasis, anchor–what-you-will. Mysterious, too, in his comings and goings, as the sea with its tide. A romantic soul. “Sure. Don’t I know? Haven’t I sat on deck in the moonlight and let fancy put on its seven-league boots and go roaming among the stars?”

He and Conrad would have hit it off grandly.

Forgive my “uplift” trend (as old M’Andrew would have said), but one does get a bit romantic and poetic over the week-ends. At last I know what the week-end really means to the hordes and hundreds! Helen and I stand by the front windows and watch the pantomimes across the street and in the park opposite–you have no idea how interesting it all is, to see these hundreds of human figures, young and old and medium, gesticulating and running and arguing and laughing–like a puppet-show, don’t you know. It is excruciatingly funny, and excruciatingly sad–sometimes we laugh at it, sometimes we weep. Always we feel about three centuries old–in comparison to Sabra, for instance, who is so full of energy that she quite appalls both of us.

Well, what’s one to do? Here we are, all of us, kicking and straining and growing black in the face to keep up to some invisible, tyrannical Mark. I don’t know, but I’m in the fight. The shorthand? I don’t know how much longer, but I know that I can’t afford it forever. I think about a month more, and then I shall get a little job out here in Columbia. I have made some important friends, got them interested in me, and built for myself a reputation which I probably can’t live up to. More struggling–to keep up with that. There is nothing very Iridescent in sight. Helen has no job, and neither the MS nor the house is sold. Cheerful! Ja gewis. Fox Film Corp. has given up all outside readers. So farewell to the putrid novels–farewell, also, to that handy little twelve or eighteen dollars a week!

What more shall I say? I don’t wish to end this in a minor key. You are NOT to think I’m discouraged, or despondent, or anything, because that would be disobeying orders, and at sea we respect orders from mates. And anything can be shattered with a laugh. Remember what dear old Satan said about that, in The Mysterious Stranger? “Power, money, persuasion, supplication, persecution–these can lift at a colossal humbug–push it a little–weaken it a little, century by century; but only laughter can blow it to rags and atoms at a blast. Against the assault of laughter nothing can stand.”

Besides, it’s Good to be alive and healthy and young, wherever you are, or whatever you’re doing; and there are wonderful things even in the newspapers. In the last Herald Tribune Magazine there were a couple of pictures which an astronomer-artist-engineer had painted of the planet Mars, viewed form one of its own moons. Could anything be more glamorous than that?

Yours for fair winds,