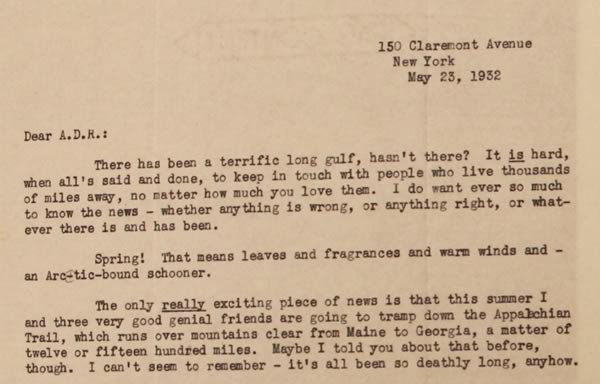 There has been a terrific long gulf, hasn’t there? It is hard,when all’s said and done, to keep in touch with people who live thousands of miles away, no matter how much you love them. I do want ever so much to know the news—whether anything is wrong, or anything right, or whatever there is and has been.

The only really exciting piece of news is that this summer I and three very good genial friends are going to tramp down the Appalachian Trail, which runs over mountains clear from Maine to Georgia, a matter of twelve or fifteen hundred miles. Maybe I told you about that before, though. I can’t seem to remember—it’s all been so deathly long, anyhow.

Helen’s book comes out on June 7; mine is in second draft form at last, and I hope to thrust it bodily under Mr. Saxton’s nose sometime in June. It will be interesting to watch the reaction. It may turn straight up in the air—the nose, I mean.

I have decided that there are a good many big and fundamental things wrong with the world, and that nothing can be done about it; furthermore, that one must revolve quietly along with the world instead of trying vainly to buck it. If you compromise enough—to outward appearances, at least—and if you fully realize what a messy world it is, and are reconciled to certain facts, such as continual change and permanence in nothing—why, then you can have a surprisingly good time. That’s what I’ve discovered anyway. I’m having a better time of it these days than I’ve had for ages—almost approaching gaiety sometimes, in fact.

But I confess to being a bit worried about you and yours. Things seemed so rather shaky and precarious for you anyway—always have, in fact. Do let me know if there’s anything wrong. Not that I could do anything. I may be seeing you before the year is up. Quien sabe? It’s a mysterious life.

I’m going to Delaware Water Gap over this coming Memorial Day week-end—at least, I think I am. In which event I’ll convey your greetings to the general countryside. Oh, the beauty of that country in spring! How is spring you your way now?

My love to everyone, but specially to you.