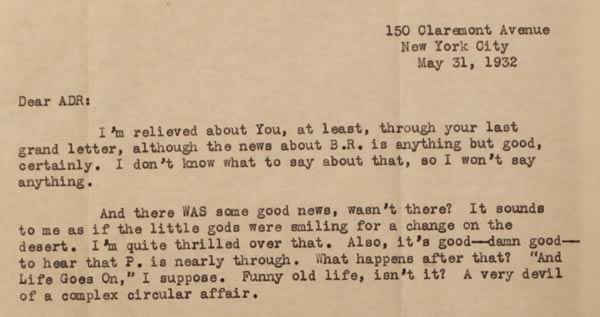 I’m relieved about You, at least, through your last grand letter, although the news about B.R. is anything but good, certainly. I don’t know what to say about that, so I won’t say anything.

And there WAS some good news, wasn’t there? It sounds to me as if the little gods were smiling for a change on the desert. I’m quite thrilled over that. Also, it’s good—damn good—to hear that P. is nearly through. What happens after that? “And Life Goes On,” I suppose. Funny old life, isn’t it? A very devil of a complex circular affair.

The book—this time I mean mine—has suddenly sprung a disconsolate discovery. I find, much to my disgust and up-noseishness, that I shall have to write another chapter to round out the thing properly. My nose is still so much turned up that I can’t get after the chapter yet. Of all exasperating things to find out after you’ve written a book—to think it’s All Done, and then to see some untucked frazzles hanging out the tail end! However, that’s but a temporary set-back. I expect to have the whole thing done before I go away for the summer. In fact, I MUST. I’ll try to get a copy to you, and I want your opinion including all the hard slams you like.

As for the AT (Appalachian Trail) we considered taking along “a second-hand burro,” as one of the boys put it. But after all, there will not be any very long stretches of total wilderness, and we can easily carry enough on our own sturdy backs to eke out during those stretches. After all, the east coast—even its mountains—are pretty well civilized in spots—too much so, in fact. The best parts will be the extreme north and extreme south—that is, the Maine and New Hampshire woods, and the North Carolina country to Mount Oglethorpe in Georgia. We were discussing plans just this week-end, when three of the party got together “Beside and Open Fireplace,” to talk.

Yes, Anderson went north again. He is now first mate of the schooner, and rather happy about that, of course. He is doing awfully well, considering everything. I MAY see him next fall—but don’t you breathe a syllable about that, even to yourself! I’m keeping it a very strict secret from myself. If you know what I mean. I mean there are some things in this world that don’t happen if you so much as admit that they’re possible. Perhaps they sometimes happen if you keep your eyes tight shut and don’t think at all.

Oh, I was in the woods yesterday. I’m sure of it, because I’ve a sunburn. It was beautiful. Light green leaves with gold light breaking through them; wild geraniums, birds singing, a lake to swim in, grand companionship—the wild open spaces—but principally sunlight. I know from that taste of it that I couldn’t by any hook or crook stay here very much longer.

Next month I’m going to spend a short week-end in Hanover with some old friends—that will mean another taste of the out-of-doors. And it won’t be so very long after that before we’re off on the grand old trail! One of the boys sent me a couple of the AT trail markers the other day. I keep one of them on top of my office typewriter, where I can see it all the time. It cheers my soul.

Well, now I’ve got to turn to and tuck the shirt-tails of my story into its pants. Do you see what I mean?

GOOD luck to you—oh, Lord, good luck to everybody! God help us—not whelp us any more!

Yours for sunshine,
B.