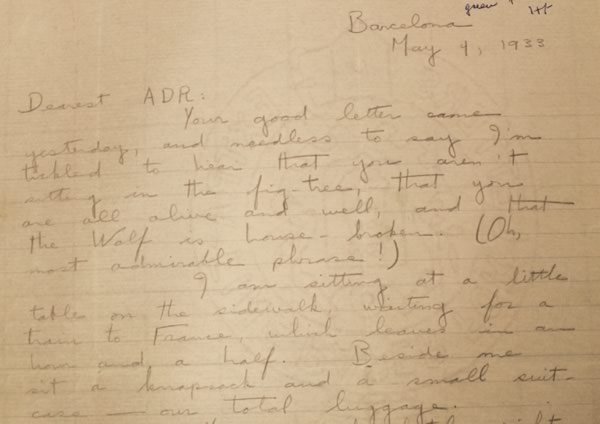 Your good letter came yesterday, and needless to say I’m tickled to hear that you aren’t sitting in the fig-tree, that you are all alive and well, and that the Wolf is house broken (Oh, most admirable phrase!)

I am sitting at a little table on the sidewalk, waiting for a train to France, which leaves in an hour and a half. Beside me sit a knapsack and a small suitcase—our total luggage.

You are absolutely right, my dear, in resenting my not having taken you more into confidence. Try to believe that it wasn’t so much that I didn’t want to tell you all about it, as that I was all up in the air myself, not sure just what was happening and not knowing where to start or what to say in any event. It is bewildering to completely change one’s life all in a minute. Do forgive me.

In brief, here is the story: I met this “mysterious figure N. Rogers” summer before last, when H. and I were living in that little cabin in Vermont. Then he showed up again that winter in New York, and we became good friends. He helped me through some trying times. We liked mountains—laid plans for getting away together the following summer. It was with him that I took that trip down the Appalachian Trail through Maine, New Hampshire, and Vermont. It was all so good that I decided to stick to it. In August I wrote Bingham, giving up my job. This—all this—is a continuation of that adventure.

That is very brief. It doesn’t tell you anything about the delicious little island in the middle of a New Hampshire lake that we camped out on for two weeks in a tiny brown tent. It doesn’t say anything about the things we have been doing in Mallorca (which we just left last night), such as living in a cave out on the coast and swimming in magic blue-green water. And it doesn’t say a word about the mysterious figure himself. Well, that’s difficult. A picture may help a little. I just know that I have never “hit it off” so well with anyone or known a more congenial comrade. We’ve been together day and night for upwards of a year now, and no prospects of splitting up. Sometime we’re going out to explore the great North-West; and we’ll come to see you, if you’ll have us.

It all happened like a shot, you see. I was sorry to do this to E. A., but when crises arise things change. Besides, I think that was drawing to a close; and this was obviously right because it was so damn natural. I believe in nature. We have to  follow the best thing we know—the thing that is at the time best.

Helen writes that she expects to come over, with Sabra, in June. We shall join up with her somewhere, and I shall help her with another book. As for my book, Lost Island, I haven’t ditched it at all. I finished it about a year ago, and I suppose it is now wearily going the rounds of publishers’ desks under Helen’s guidance. I still think it’s a pretty good book. I haven’t written much since—a little short stuff.

But, writing or no writing, I’ve been living pretty hard, which is what I want to do. Last summer, that tremendous succession of mountains down the backbone of New England. Then, the business of sailing from New York. A rather dull winter in Mallorca, when it rained all the time, and we sat around Spanishly in cafés and read. Then, a good walking trip around part of the island, with a borrowed blanket. Living in a cave, making friends with carabineros (the coast guards—good fellows, all of them), eating with them in their huts, warming ourselves at night around their little fires and learning Spanish from them; swimming along great sweeps of beach, exploring Moorish watch towers about a thousand years old, sailing on several exciting cruises on a small sloop owned by an interesting chap. Now we are bound for France and Germany to tramp some more this summer. We are poor as church mice, of course, but progressively browner and happier as time goes on.

The train arrived. We took about five different ones before we were through, and eventually landed here, under a line of mountains—sharp white peaks, with blue shadows. I imagine we shall be here about a week, then go on afoot over Switzerland and part of Germany.

That’s about all of it.

Thanks for the news about W. F.—not that there is much one could dignify by the name of news! I do want to look him up again sometime—be it Maine or California. That is another of the thousand-odd things we’ll do when we get back. We shall probably establish ourselves in a shack in the woods somewhere and explore from it. I like Civilization less and less.

Your letter was good to have. Do it again when you feel like it! (The same address holds good—we have no other yet.)

Much love to the “family.” I think they’re grand, all of them!