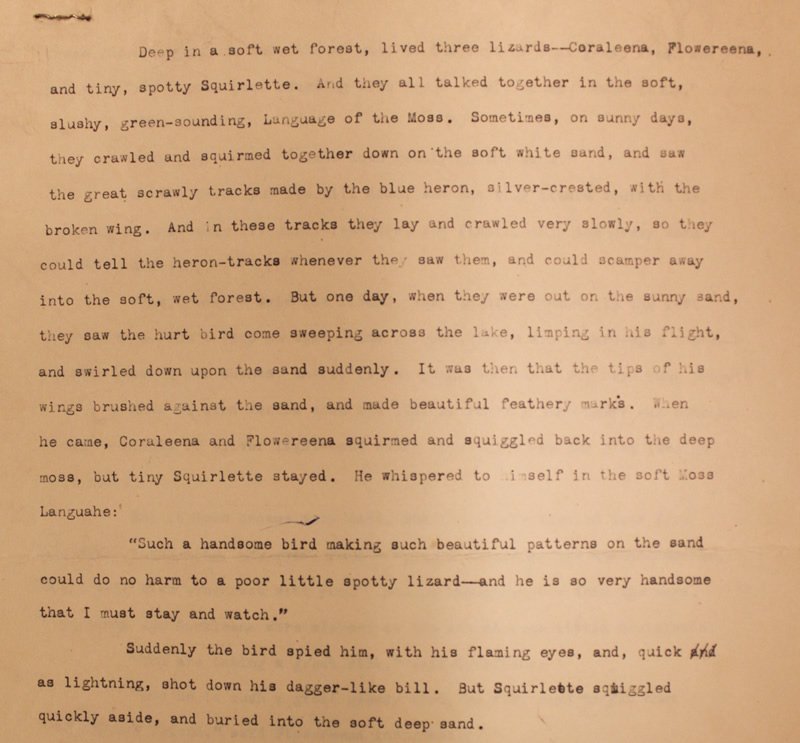 Untitled (Language of the Moss)

Deep in a soft, wet forest lived three lizards—Coraleena, Flowereena, and tiny, spotty Squirlette. And they all talked together in the soft, slushy, green-sounding Language of the Moss. Sometimes, on sunny days, they crawled and squirmed together down on the soft white sand, and saw the great scrawly tracks made by the blue heron, silver-crested, with the broken wing. And in these tracks they laid and crawled very slowly, so they could tell the heron tracks whenever they saw them, and could scamper away into the soft, wet forest. But one day, when they were out on the sunny sand, they saw the hurt bird come sweeping across the lake, limping in his flight, and swirled down upon the sand suddenly. It was then that the tips of his wings brushed against the sand, and made beautiful feathery marks. When he came, Coraleena and Flowereena squirmed and squiggled back into the deep moss, but tiny Squirlette stayed. He whispered to himself in the soft Moss Language:

“Such a handsome bird making such beautiful patterns on the sand could do no harm to a poor spotty lizard—and he is so very handsome that I must stay and watch.”

Suddenly the bird spied him, with his flaming eyes, and, quick as lightning, shot down his dagger-like bill. But Squirlette squiggled quickly aside, and buried into the soft deep sand.

But the heron put his bill down where Squirlette was hiding, and said, in the Language of the Silver Minnows (and it sounded like silver bubbles falling): “Oh, you little spotty thing, I never saw a lizard dance like you. If you will show me five fat frogs close together, I will not hurt you.” Squirlette drew his head softly out of the sand. The magnificent bird stooped low, and playfully darted down his silver bill toward Squirlette.

“Oh, you great beautiful bird,” exclaimed the little creature, “I cannot run very fast, but if you will carry me, I will guide you to all the frogs you can eat. Go into the forest, to the left of that great tree, and you will find a moss pool swarming with frogs of all sizes. Take me up.”

“Lay your great cutlass down gently in the sand.”

So the heron put his bill down, and the tiny lizard squirmed up, down his neck between his crest-feathers, and finally into the mossy down of the bird’s wing.

“Now, ready,” said the lizard, very loudly, “there, to the left of that tree—don’t step on that piece of moss, there are lizard eggs there—between those great bushes, there is the pool, and don’t you hear the frogs?”

And the bird darted down his bill so rapidly that there was nothing except a streak of silver light—and every time there was one frog less in that pool.

But it soon became very dark, and the lizard tumbled down from the downy heron wing, and said, “Goodbye, wait for me on the beach tomorrow, and I will have breakfast with you.” And he scampered off into the moss.

“You are taking a great risk,” said Coraleena.

“And he is such a great greedy bird, he will soon forget that you are his friend,” said Flowereena indignantly.

“But he is a beautiful bird, and makes patterns on the sand, and I am going for breakfast with him early tomorrow.”

When tomorrow came, Squirlette, carrying ant eggs for breakfast on a small green leaf, went to meet his friend—and while the heron ate frogs from the edge of the lake, Squirlette feasted on his ant eggs, sitting on the great bird’s back. Then they went into the water together—the heron wading stately about, making his great tracks over the sand, and little Squirlette, who could swim nearly as well as the minnows, took daring flip-flop dives from the low rocks, and swam circles about the legs of the heron in a dazzling way.

And so it continued every day. Squirlette always had an early breakfast with his great majestic friend, and then they went in the lake together, and the heron caught minnows with dazzling rapidity. But one day that beautiful bird put his gleaming dagger down to the little lizard, and said: “I am going, little friend, for my wing is better now.” And majestically he sailed away, his wings strongly beating the air with great flaps.

And Squirlette was very sad.