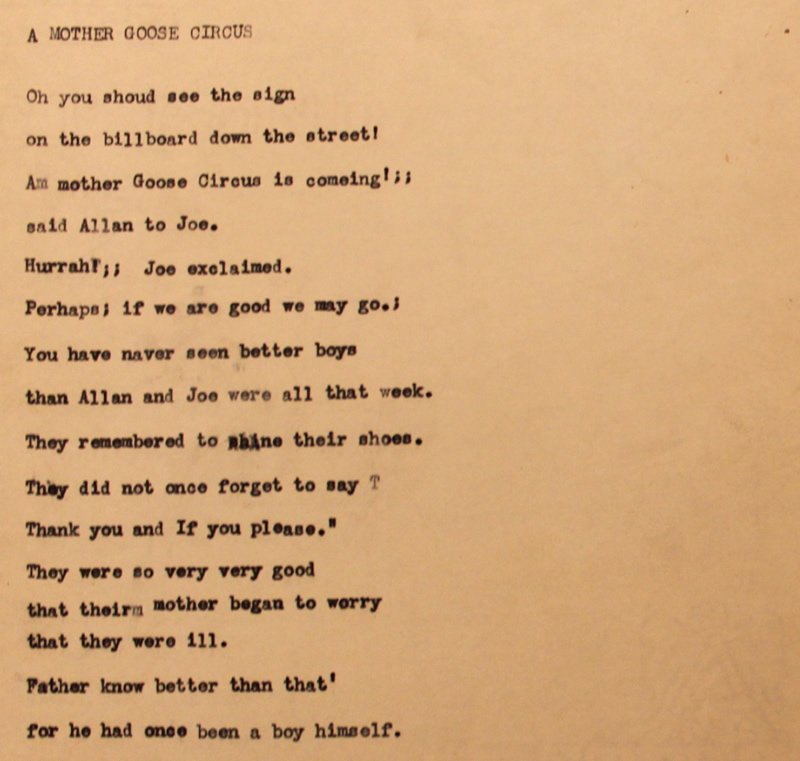 At last Circus Day arrived
and the boys started for the show.
How fine the canvas tents looked in the grass field!
On each tent were many flags.
At the entrance stood Handy Spandy
selling peanuts and lemonade.
Their father bought some peanuts.
Suddenly the curtain was opened.
A blast from Little Boy Blue’s horn
told them that the procession
was ready to start around the ring.
First came a gilded band wagon
drawn by for jet-black horses.
Tom the piper’s son sat in the wagon.
“Tom with his pipe
made such a noise
that he pleased right well
Both girls and boys.”

There was also a cat that came playing out of the barn
with a pair of bagpipes
under his arm.
Old King Cole’s fiddlers three were in the band wagon too.

Old King Cole himself came next,
riding in a beautiful chariot
drawn by eight snow-white horses.
Then followed noble lords
on horses which went
Gallop-a-trot gallop-a-trot.
Behind them came fair ladies
whose horses which trotted
Hobbledy-hop hobbledy-hop.
Then appeared a giant shoe on wheels.
In the shoe sat the Old Woman
with all her children.

One boy tried to jump out
so he was spanked and put to bed.
Following the shoe were—
Three rats with black felt hats
Three ducks with white straw flats
Three dogs with curling tails
Three cats with pretty veils.
The band played a lively march and—
Nixie dixie hickory bow
Came thirteen Dutchmen in a row.
Two corporals held a piece of twine
to help the Dutchmen keep in line.

Oh look! said Joe
Then he pointed to the top of the tent.
There was dear Mother Goose
Flying on her Gander into the ring.
How the children cheered
when they saw their friend!
Dear Old Mother Goose
when she came in
turned her son Jack
into Harlequin.
She then with her wand
touched a lady so fine
and turned her at once. [sic]
Then the Gander flew away
and Old King Cole and Mother Goose
seated themselves in the royal box.

Harlequin and Columbine
were the first to perform.
They sang together
Wing wang waddle O’
Jack sing saddle O’
Merry boys bubble O’
Then Columbine danced on her toes.
Harlequin tried to dance too
but he was so clumsy
that he stumbled more than he danced
Then Harlequin sang alone
“The fisherman’s daughter
She lives o’er the water;
She’s going to be married
Next Sunday to me.”
The Cock-Horse from Banbury Cross
was brought into the ring.
Harlequin and Columbine
jumped on the back of the Cock-Horse
and rode around the ring.
They jumped through hoops
and performed other clever tricks.
Then Harlequin and Columbine sang,
Sing, song, merry-go-round,
Here we go, up to the moon O’

And sure enough, the Cock-Horse
all at once sprang into the air
and began to gallop toward the moon.
The “Pig without a wig”
saw them rise from the ring.
He flew up in the air, but—
The man in brown
Soon brought him down.
Then a high wall
was pushed into the ring.
The children were delighted
to see their old friend Humpty Dumpty
sitting on the wall.
He was dressed like a clown.

Then the dog lay down
and pretended to be dead.
When Mother Hubbard patted him,
the dog jumped up and laughed,
and then he stood on his head.
The Crooked Man
Walked a crooked mile,
and Peter Piper
Picked a peck of pickled peppers.
Then the lights were lowered.
Professor Know-it-all came in,
to show his magic power.
Hocus pocus! Hocus pocus! he said.
Then—
The Dog flew in with a saddle
The little Pig rocked the cradle,
The Dog jumped up on the table,
And the big Pot swallowed the ladle.

There stood a great pie.
He opened the pie
Out flew four and twenty
“When the pie was opened,
The birds began to sing.”
The cow was now to make her jump.
The moon was hung up in the tent.
In flew up to the moon [sic]
and swept off the cobwebs.

Then the Old Woman flew out
through a hole in the tent.
The cow stepped on the springboard
and bowed to the children.
The band played “Hey, Diddle, Diddle.”
Then the cow gave a spring
and jumped over the moon!

When Humpty Dumpty saw the dog
laugh to see such sport, he thought
“Wait until he sees me
jump over the moon!”
So he sprang into the air, but—
“The man in the moon
Came down too soon,”
and ran into Humpty Dumpty.
So Humpty Dumpty had a great fall.
“Oh, that is too bad!”
all the children cried at once.

Good Doctor Foster was sorry, too.
“The little children,” he said,
“would lose much of their fun
if there were no Humpty Dumpty!
So the doctor took his magic plaster
and put Humpty Dumpty together.
They placed him on his wall,
and there he remains to this day,
the merriest of Mother Goose’s clowns.