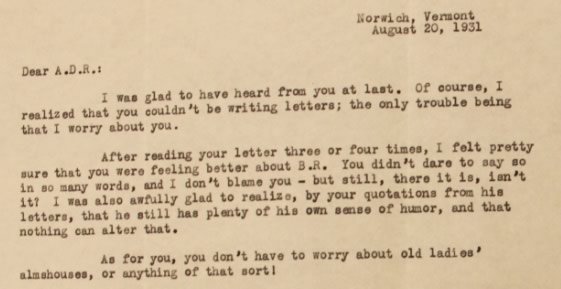 I was glad to have heard from you at last. Of course, I realized that you couldn’t be writing letters; the only trouble being that I worry about you.

After reading your letter three or four times, I felt pretty sure that you were feeling better about B.R. You didn’t dare to say so in so many words, and I don’t blame you—but still, there it is, isn’t it? I was also awfully glad to realize, by your quotations from his letters, that he still has plenty of his own sense of humor, and that nothing can alter that.

As for you, you don’t have to worry about old ladies’ almshouses, or anything of that sort!

When I turned the page of your letter and read the “further happenings of this horrible summer,” I said to myself: “This is more than the limit. It can’t be true.” And I laughed a little, it seemed so utterly far-fetched, if you know what I mean. Well, what can I say? Ye Gods!

Thanks for the clippings. Yes, I sympathize very much with that poor chap who wanted to be let alone and to have a row-boat.

You want to know Things. I should say it was you who had the Things to relate. Helen says that she would write to you, only she can’t think of anything to say, because there is too much to say. She feels for you quite tremendously, I am sure of that. Her revision is all finished now, except for a few details. She is now working on a new prospect, a rather vague one as yet, in connection with radio broadcasting.

We haven’t gone back to New York yet. I may not for nearly two weeks yet. I haven’t gotten very brown, and I’ve worked pretty nearly all the time, but I’ve enjoyed myself a good deal. Somehow I can’t make this summer a parallel with the one of yours that you told me about. I am a bit depressed, and anyway the hermit-thrushes have stopped singing now. But the goldenrod is glorious. I console myself at times by indulging in long conversations with an ancient farmer who has friendly blue eyes and an immense white moustache behind which he smiles secretly.

The Harper article fizzled, because I couldn’t, if you know what I mean. The book may just possibly escape fizzling. I have nearly finished the sixth chapter now. That is about half of it, I should say, because they are long chapters—fifteen pages each. I still hold to my opinion that it’s a pretty good book.

I think it was grand that you got that Thanksgiving story off. I don’t know how you managed it, with all your sixteen worries, each one being plenty for one person at a time. I get thrown all off the track myself by reading in the newspaper some little item about the ice being bad up Point Barrow way.

The thing I have been gladdest of this summer, I think, is that I have been working on Farksoo again, after a long spell during which it rested in a drawer untouched.

I am lonesome as hell, and wish I could see you. It was partly for selfish reasons that I suggested that you come east this winter. The invitation still holds good, in fact, it always holds good. If I ever come to live out west, you’ll come to see me sometimes, won’t you? We can have cocoa and discuss the events of the world. I believe I shall come, someday.

I guess that’s about all. I feel miserable because I can’t do anything, for you or myself or the ice or anything. I think impotence is about the worst sort of curse. If ever there is anything I can do, you’ll let me know, won’t you? And if anything does happen that makes you change your mind about coming east, remember that we want you.