A little before her planned book about Farksolia, Barbara had the idea for one about Fairyland. Here is its Fairicter, or fairy descriptions. 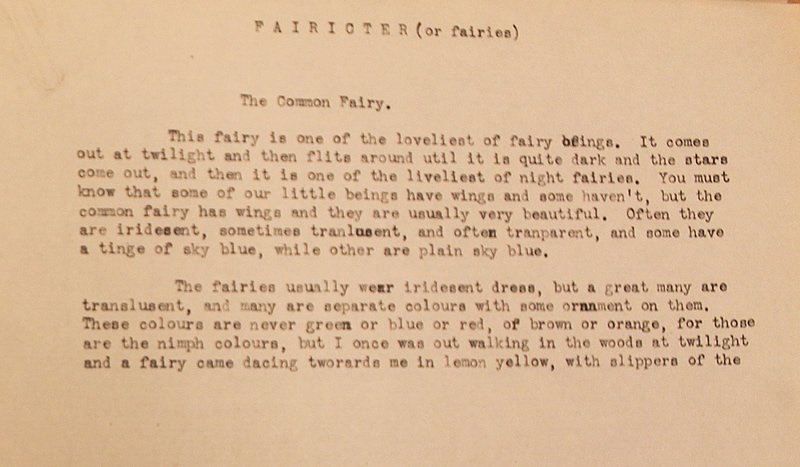 The common fairy, which of all the fairies, nymphs, gnomes, elves, or brownies is the commonest and almost the [most] beautiful I think I will start with for I suppose that you think most about her. I suppose that you have quarreled a good deal with your playmates about which varieties of fairies have wings, but one reason that I am writing this book is to tell you and I think that when you have found out that you will believe me and not quarrel about it any more. The common fairy has wings and uses them more than any other fairy. I can just hear you say now: “How about the breeze and cloud fairies? Don’t they have wings? Aren’t they in the air all the time?” Yes, they are but breeze and cloud fairies don’t have wings. They live in the air and play about in it without wings as well as you do in the grass.

The colour of the fairies’ wings are never green, orange, amber, red, pink, or blue, as some people think, for very commonly people get nymphs mixed up with fairies. Fairies’ wings are light brown, purple, spotted, or yellow, those that are plain colours. Their dresses are often seen in the same colours. But for the most part fairies’ dresses are filmy (not transparent always, but sometimes) or translucent and the wings too.

This dear little creature, the common fairy, comes out of its home (which is sun-lined and flower-carpeted) sometimes in the daytime, but only on very clear days, and then it stays in the woods. But when it comes out at dusk it never cares where its gentle flight leads it except in towns and cities.

The fairy has a slim form and a wonderful ability to make itself seem shadowy or to make every mark on its wings and dress stand out and another wonderful one to make itself invisible or visible just as it wishes.

In the next story I will tell you about a small variety of fairy and of some of my adventures with them.

This darling of the world is a close relation to the common fairy but a much smaller variety never growing more than five and a half inches.

It has no wings but spends most of its time making paths among the plants and flowers upon which it runs so smoothly and easily as a white snowflake glides to the ground. Especially it loves to find places in the woods where trailing vines and flowers grow among which it makes its paths about the size that an ant would make in the grass. It seems to have a great fancy for the arbutus and is gaiest at the season when the arbutus blooms.

Its house is made by finding a pile of thorny underbrush and carrying out some of the branches inside so that it is hollowed out. It is then lined with soft moss.

This little fairy gets up at dawn and is then up for the rest of the day. It never ventures into cities but keeps to the woods where it lives.

Once upon a time I was out walking in hope of seeing a ground fairy, and as I came into a little open space I heard rustlings in the [word missing]. Here rather large flowers grew, and as I walked quietly along trying to find out the cause of the rustles, I saw five baby ground fairies climbing up the flower stems. They were just a half an inch long but were as perfect in shape as newly born kittens are rather misshapen. They were all taking turns climbing up the largest flower stem and the one that was climbing, when it reached the blossom, climbed up into it and then amused himself by falling down upon the others.

When they noticed me, which they didn’t for some time, they began squeaking, grunting, and tumbling around on top of each other, leaving off their climbing, until a mother ground fairy came twisting through the flowers on a little path that she had made and with a glance at me led them all off.

It was the first time I had ever seen a ground fairy, and I marveled at the beauty of the tiny creature. I also marveled at the path which Mother Ground Fairy had made. There was not a blade of grass growing on it, or a stick or stone in the way. If I were so tiny I could run along that path without stumbling.

So you see that if you are looking for some little fairy or elf you must not run after it if it runs away (it would very likely, for fairies and elves are very timid), but be patient as best you can.

In the next story I will tell you about one of the ground fairy’s cousins called the butterfly fairy.

This is a sweet little creature which never grows more than four inches and is always clad in light green or deep purple velvet. It never gets up at dawn but waits until real daylight is there. It loves to ride on the backs of butterflies and feeds on honey like butterflies. It has a long yellow tube which hangs from the middle finger of the right hand which it digs into the flower, brings up and laps off. It is on the whole a rather foolish little fairy which knows not much more than a butterfly that it is being pursued when it is. It has wings usually the same colour as the dress, more translucent, with which it flies about as well as a butterfly does. If it is being pursued it keeps on dancing in the air or on the ground swooping over the person’s head not knowing that it is being pursued. As soon as its babies are born the mother leaves them to themselves as they are quite able to take care of themselves.

This fairy I haven’t any more to say about than I had to say about the butterfly fairy. It never grows any longer than three quarters of an inch and spends all its time riding on the backs of bees. It feeds on honey like the butterfly fairy only the silver tube which hangs from the middle finger, and can be folded up out of sight is about as big around as half of a hummingbird beak, and about as long as a tiny butterfly’s feeler, or, rather shorter than that.

The sunbeam fairies sometimes have wings, but hardly ever is this so, which are so gauzy that they can hardly be seen and are about half as large as the body which is very small, the body being three quarters of an inch.

Tiny sunbeam fairies usually dress in every pale green or a golden colour, which makes them look as if they are the babies of the sun. They live in flowers and never get up until the sun is well above the horizon.

In the next story I will tell you about the larger sunbeam fairy.

I haven’t much to say about the Larger Sunbeam Fairy. They have no wings. They grow to be about three feet tall and are usually clad in amber. They are usually seen dancing down a sunbeam or frolicking about in the rays of the sun, sitting on its round globe; then, whirling, twirling, quivering, darting, and diving about the sun. As the rays of the sun strike the fairy its amber dress breaks into wavelets of an iridescent colour only to gather again in all its beauty.

Exceeding nearly all in loveliness is the simple relative of the Common Fairy. Dressed in a star-sprinkled white draped robe with wings ornamental but useless she flits about. The wings are a very pale Prussian Blue, with one large and one small spot. Grass fairies usually are about four feet, four inches tall. With a crown of pink azalea and maple leaves she lives in all her loveliness.

This fairy is clad all in yellow with a draping robe and a crown of buttercups. They grow about two feet tall and are the most exquisite dancer ever seen. They are the rulers of buttercups, and make the withered fresh. There is another variety of buttercup fairy with wings four yellow ones, translucent, misty and watery covered with irregular spots and blotches of lemon yellow. There are two wings on each side, the two are close together like a butterfly’s wings.

The air fairies are the most interesting little group of beings possible. They are wingless and grow to be about nine inches high. The queen air fairy is always dressed in amber with a crown of dew-drops and water-gems. She is usually slightly taller than the others. The others are dressed in green, pink, and white, with possibly a lavender one. The white ones decorate themselves with the loveliest peach blossoms. Once I saw a troop of lavender ones bearing their sleeping queen on a couch of opals. Each of the fairies had lilacs on their lavender robes, lilacs nearly as big as they were. A more lovely sight could not be imagined when a troop of white fairies decorated with peach blossoms were playing with a flock of yellow butterflies. The fairies all had crowns of peach blossoms. I shall never forget the day when I found the queen’s couch set up in a peach tree at the time of the blossoms. On each side of her bed was a lady-in-waiting rose velvet, with button roses in her hair and a spray of unusually blue bluets, and lily-of-the-valley on their breasts. Perhaps nothing more dainty could be imagined than when another time I found their queen sleeping in a great cluster of violets and six fairies in white decorated with peach blossoms were throwing rose petals over her. Another time I found one of these fairies asleep on a moss bed. Again I saw a fairy in white, her dress covered with aquamarines dancing among the trees. But most of their time is spent up in the air dancing and playing about.

I have not much to say about Gliding Fairies, but what I have to say is very interesting. These fairies are wingless. They grow to be about two feet and one half tall, and they are clad in bright gold. They are seen wobbling and quivering on the branch of a tree, seemingly breaking up until, with a flash of gold they dart out. The brightness is so intense that, no matter how much you try to keep your eyes open and not blink, blink they must and usually stay shut for about two seconds afterwards. When you open your eyes again the fairy is on the tree again, wobbling and quivering.

This is a very curious creature which is wingless. It has a human shape, but this can hardly ever be distinguished from the translucency of the air itself. When it is whirling about in the breeze, which it is doing most of the time, it looks like a spiral line. They do not play in groups.

This is not really a fairy, but a giantess, clad in gray fluffy mist, wingless, who comes sweeping along with the stormy black clouds. There is another variety of this fairy that is more frolicsome and plays about the little white clouds, much smaller.