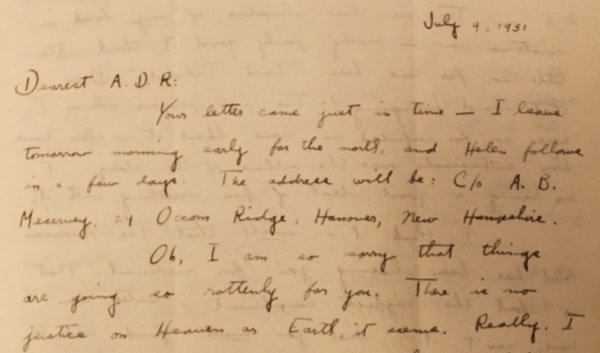 Your letter came just in time—I leave tomorrow morning early for the month, and Helen follows in a few days. The address will be: ℅ A. B. Meservey, 24 Occam Ridge, Hanover, New Hampshire.

Oh, I am so sorry that things are going so rottenly for you. There is no justice in Heaven or Earth, it seems. Really, I cried over your letter—as if that would help any! How I wish I could do something! My heart would tell you to pack up and go to B. R. at once. But there’s poor E. So I would compromise. I would go to him as soon as ever her need of you is abated a little. I don’t believe it’s a case of Money, A. D. R. … But then, of course I am probably all wrong. Only you mustn’t say that about not seeing him again. You mustn’t even contemplate such a thing. There is a limit to what the gods can do, you know.

There are three chapters of my book in existence now—pretty fairly good I think. Its title so far has been “Lost Island.” Does that sound intriguing? The few persons whom I have so far confided in have liked it—also have been enthusiastic over the outline of the story. I am having a good deal of fun wrestling with it.

I think it’s swell that The American Girl has been chasing you for material. That is about the highest compliment a writer can have, isn’t it? And you must find time to do the work. If I think of a rip-snorting Idea I’ll let you know. But maybe you already have plenty of Ideas. Apparently that is the easiest part! It seems to be with me.

There are no further developments on Helen’s book. I imagine it will be out next spring sometime. They are casting about right now for an illustration—a “tropical bird” preferably, as H. says. Whether it will work out I don’t know. Also, we are still revising the MS. One can revise till Doomsday, it seems. We probably will!

Alaska is a Hell of a long way off! No mail until October. But that’s something to anticipate. He is such a faithful soul. Two letters a week, and sometimes three, form the time he landed last fall till the schooner sailed this spring. He’ll come back. I have an idea that he’s unbreakable and eternal.

Oh, A. D. R., I don’t know what to say, but I’m sure you should come east. The bus costs only $55. Could you stand the bus? If it’s lack of ready cash, I could remedy that—yes, even I, incredible as it may seem. And oh, how I’d love to see you myself! Of course, there will not be that old California glamor—that subtle, fleeting thing that surrounded us before. It might be a little unreal. I haven’t carried over much of that atmosphere. But we could have cocoa and graham crackers even here, and I could whirl you around. How about next fall?

Next fall looks just a little dreary to me anyway. To be sure, I’l have that same job again, and probably it will be a bigger one. My employer has industrial ideals—that your job is your own property, so to speak. But oh, oh, in N. Y. the moths feed on the wings of your soul. This is probably an unhealthy attitude, I know. But I do think the world is rather horrid. Most of my dearest friends seem to be in deep trouble, and I can’t do anything about it.

Perhaps that’s why I cling for dear life to A. He, with no tools and no material, has nevertheless made something most beautiful and real out of life. I don’t know just how. But he is a rock and a shelter. I’ll never forget or forgive WF’s attitude toward him. That was mainly what caused the sharp and sudden break between him and me. It was unwarranted and ridiculous and mean. My respect for WF did its loudest blowing-up over that…. A. is a treasure.

Anyway, you come East this fall—or sooner. One can get to the point where one doesn’t know what to do and consequently does nothing, whereas an outsider, acquainted suddenly with the true situation, at once forms rather definite opinions. Of course, this outsider isn’t pretending to be God! But I know how easily one can let Money rule one—especially if Money is thought of at every step. Soon one ceases to take steps. I know!

If you will come, you know that you could stay here with us—we have plenty of space now, and anything we have is yours. Helen longs to see you, too. You would be quite close to B. R. and could run down to Washington often by bus. I feel sure that everyone concerned would be happier for it. You could rent the house; and if Phoebe couldn’t come too I know she would understand, and would be glad to carry on for a while. And oh, we would welcome you so! So do think of it seriously.

This is a nice, cool, comfortable apartment, with lots of light and plenty of good tables to work on. You could get a lot of writing done. We would all be writing together. Wouldn’t it be fun? Also, we live right near the Hudson River, which is really beautiful at night–dreamy, promising. There is a nice park—a public spoonery, to be sure, but still very nice. I think we could have a grand time.

This is the great 4th of July. It seems strange and incongruous somehow, to hear the snapping of toy pistols and firecrackers. Silly. It makes H. and me a little depressed. Seems so utterly futile.

One very nice thing did happen this week. The Chief wrote to me — at last. H. had been to Boston, and his boat was in. She went down to pay a friendly visit. The letter is more or less the result of that, but that fact doesn’t make it any less pleasing. It’s just the kind of letter that was needed to square that account. It has relieved me more that I imagined, and given me a freedom from that vague and horrid sense of guilt and discomfort. Until now there was still something pending—waiting to be settled. Not it’s all definitely fixed, somehow—the account has been cleared, and well cleared. Until now I had vague feelings of sadness on the subject, which have completely vanished now.

Now for the woods! I am looking forward to sunlight and trees — the Earth. Except for a curious and indefinable loneliness, which I have experienced a good deal of late without exactly knowing why—except for that, I think the next two months will be glorious. One does get lonely in the springtime somehow, when the wind is warm on your face and the grass is green.

I need you a great deal. I know we each have a lot to discuss and propound which we wouldn’t by mail. At any rate, mere quiet companionship would be very soul-satisfying.

Do give our love to the “fambly.” I am holding my thumbs for you, my dear, and I do want and hope and long for things to be better. I won’t say “pray,” because whatever small part of God I may once have believed in, I don’t believe in any more. But I believe in love.