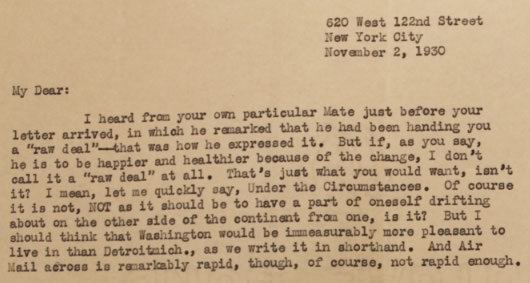 I heard from your own particular Mate just before your letter arrived, in which he remarked that he had been handing you a “raw deal”–that was how he expressed it. But if, as you say, he is to be happier and healthier because of the change, I don’t call it a “raw deal” at all. That’s just what you would want, isn’t it? I mean, let me quickly say, Under the Circumstances. Of course it is not, NOT as it should be to have a part of oneself drifting about on the other side of the continent from one, is it? But I should think that Washington would be immeasurably more pleasant to live in then Detroitmich, as we write it in shorthand. And Air Mail across is remarkably rapid, though, of course, not rapid enough.

Don’t allow your feelings to be too much mixed about my job. You see, I really am having quite a good time. Don’t imagine that it’s a desperate struggle, or anything of that sort. Taking letters in shorthand is still quite a glamorous proceeding to me; though the last few days I have been addressing fifteen hundred envelopes–invitations to the very formal banquet of the Annual Fall Conference! That is rather monotonous, but it is just part of it, you see; and I like the people I work with–we all get along admirably well–and none of them works very hard; so I couldn’t have landed in a better place for a first job. After November 7th, I think it will be full-time, at twenty-five a week, or thereabouts. That is a remarkably good wage for a person so inexperienced as I.

Helen has just triumphed over a very crooked deal that was going on in New Haven concerning the house. She found that she had gotten into a “nest of crooks,” so to speak, and by supreme courage and daring she managed to call their bluff, and we don’t think any radical harm has been done. She is going to give a little talk soon, about the trip. She seems to be quite cheerful, and is riding the waves in great style. I like to see a ship riding the waves.

The way you are, my dear Matey, and Phoebe, and the other member of the family in Detroit, and also the Deserters–of whom what news, by the way? I hope there will not only be cocoa when next I sail into port, but also Graham Crackers. I laugh still when I remember that colossal carton which Phoebe so thoughtfully purchased for my luncheon one day! Is it empty yet?… Last night Helen and I, with California resounding in eyes, nose, and mouth, bought and ate two large red-gold persimmons…. Not long, now, Matey–not long! I’ll be there!

I really think you are a thorough-going Traitor not to have been dumb enough to have been surprised; though, certainly, you would have been dumb, come to think of it. Don’t think that that “dramatic arrangement” was at all pre-thought-out. It just occurred to me that the announcement needed a page to itself. It occurred to me just as I got to it–not before; and so I just naturally took that page out of the typewriter. It wasn’t until afterwards that I slipped it back in to indicate that the letter didn’t jump off in mid-air right at that point.

The dropped stitches have been carefully retrieved; or, I’d better say, the torn sails have been carefully patched, with marline warranted to hold “till the cows come home.” (Funny, that that should be a nautical expression, but it is used by every sailor on earth when he’s speaking about tying knots!)

It would be hard to tell what a relief it is to me. I don’t any longer get to wondering whether the schooner is hemmed in by icebergs or getting battered by Arctic gales, or any such horridiferous thoughts. He, being a cautious soul, has decided to stay aboard a while longer, because there aren’t any jobs for sailors any more than there are for anyone else at present. The vessel is laid up in Seattle, and he and the mate are alone aboard. They take turns cooking and feeding the cat, and they work whenever the weather lets them. So I guess he’s lucky, and he is certainly quite right to stay where he is. It was, as he termed it, a “professional compliment” to be asked to stay on, alone of all the other men, anyway.

Seems to me this was a specially juicy lot of headlines. The New York Times and the Herald Tribune never indulge in such things, and I chuckle over these long and heartily. I can’t make any of them out, which certainly proves that the headliner is a “bright fella.” More power to him!

More power likewise to the “pot-boilers!”

God bless us, every one.