Another unfinished story—one that introduces a Farksolian bird called the greenit. 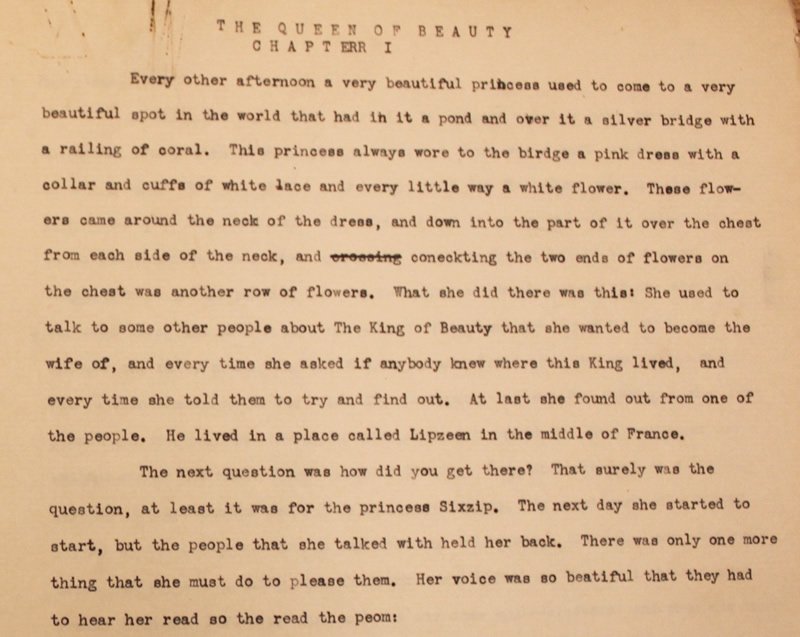 THE QUEEN OF BEAUTY
CHAPTER I

Every other afternoon a very beautiful princess used to come to a very beautiful spot in the world that had in it a pond and over it a silver bridge with a railing of coral. This princess always wore to the bridge a pink dress with a collar and cuffs of white lace and every little way a white flower. These flowers came around the neck of the dress, and down into the part of it over the chest from each side of the neck, and connecting the two ends of flowers on the chest was another row of flowers. What she did there was this: She used to talk to some other people about the King of Beauty that she wanted to become the wife of, and every time she asked if anybody knew where this King lived, and every time she told them to try and find out. At last she found out from one of the people. He lived in a place called Lipzeen in the middle of France.

The next question was how did you get there? That surely was the question, at least it was for the princess Sixzip. The next day she started to start, but the people that she talked with held her back. There was only one more thing that she must do to please them. Her voice was so beautiful that they had to hear her read so she read the poem:

In the middle of Maireen stands a ring.
A fairy ring it is—
Where moonlight comes,
And the evening cricket hums,
And flowers breathe sweet and fresh.

In the middle of Maireen stands a ring.
Where flowers draw the honey-bees,
And the sky is blue over-head,
Even when flowers go to bed,
At least that is what people say.

In the middle of Maireen stands a ring.
Where the sweet birds sing all day
—(At least that is what people say),
When people go to bed they sing,
And in the day-time, too.

There was a great applause, but the people must hear Sixzip sing. So she sang and then the people were satisfied and let Sixzip go, but they told her that she must go through dangers, and they told her to be very wise when she walked through Fairyland.

So the next day Sixzip started. She passed a lovely pine forest which was simply scented with pine needles and there was a soft carpet of them on the ground. But one of the wise people told her that there was one clear path leading to Fairyland and they told her not to go on the blurred paths but to follow the clear one. So she went by the pine forest but it was a great temptation to go through it, but she knew that she would astray if she did, and she went along and pretty soon she came to Fairyland and the first thing she saw was the fairy arena, and on it were several little fairies skating around. The fairies skated on silver, and they used pussy-willows for skating boots, and pearls for skates. The arena was sheltered with sunset and the beauty and the brightness of the whole thing dazzled Sixzip. Then when she went on a little further she saw before her a pile of pussy-willows. In great curiosity Sixzip lifted up the pussy-willows to see what was underneath. She only saw some sunbeams and she was greatly surprised; then she lifted up those and she saw some grass; then she lifted up that and she saw some apple-blossoms; and when she lifted that up she saw some cotton; and after that she saw the Fairy Harp. It was just like any harp embroidered with gold only it was ever so much smaller than real harps. She plucked a string very gently and it was an exquisite tone that she heard. She was rather shy about it because she was afraid that the fairies might hear her and she didn’t want them to. But she remembered what the people told her, to walk wisely through Fairyland. Then she saw a glass tree with all the fairy’s rings and things. There was a ring of yellow celluloid with a little white flowette (I call a flowette a little flower the size of a bluet), with a tiny red centre and little yellow leaves and pretty shapes carved in the ring all the way around it, and all sorts of pretty rings and pretty belts and things like that.

As Sixzip walked on, she soon saw the fairy garden which was divided into thirds; one third was for the flowers of the wood, another was for field flowers, and the other was for garden flowers. There were three kinds of flowers in each third of the garden, and in the wood-flower third there were Trailing Arbutus, Anemones, and sprigs of Witch Hazel; in the field flower third, there were Buttercups, Daisies, and Clover; and in the garden flower side there were Crocuses, Snowdrops, and Irises. In the very middle of the garden was a circle where the grass grew very light green. It was embroidered with dandelions, and they looked like gold. In the very middle of the light grass plot there was the fairy throne where the King of the Fairies sat. The throne was made of white marble and the back and arms were bordered with pearls. The King was there, but some fairies that were dancing around him, hid Sixzip from view. They were dancing at a great rate and the King was playing on the Fairy Harp that Sixzip had seen for them. But Sixzip walked right along and the King never took any notice of her; her light hair streamed behind her in the breeze, and suddenly a whole flock of little greenits came flitting along. (Greenits are little birds that are green all over and the wings and crown are yellow.) They sailed right past Sixzip and went to the King’s throne where they separated and met each other on the other side of the throne and then went off again in a flock. Then the fairies that were dancing around the King flew off with him and Sixzip was left all alone. These greenits were the sign of humans, and of course Sixzip was the human that they were afraid of. So Sixzip went on all alone and pretty soon she came to a gold fence and a gold gate to it. She opened the gate and saw a sign up that said on it, “The Intrance of France, all are Wellcome.” Sixzip went in and she met a man who said: “Do you want to find Lipzeen and the King of Beauty? You are such a beautiful young princess that you look as if you want to become his wife.”

“So I do,” returned Sixzip, “but where do you find him, what street does he live on?”

“There are two witches on the way to the entrance and you will probably be bewitched on your way, but have no fear a good witch will soon bewitch you back into yourself again. There is a good witch and a bad witch, but be very wise as you walk. Good-bye.” And the man disappeared.

“Oh dear,” said the Princess, to herself, “the whole world seems so magical, I thought that I could have a good conversation with the man and now I have forgotten all the things that I wanted to say to him.” And with that the Princess walked on very slowly. “You can get a good conversation with me until you are a tiger,” said a voice close by, and in an instant the bad witch jumped out from behind a tree, and Sixzip found that she was a tiger. But she kept the human thoughts in her mind. She wouldn’t go off into the woods and roar just because she was a tiger, but she would keep on going towards the castle of the King until the good witch changed her back into herself again. Very soon the good witch did it, and then Sixzip asked where the entrance of Lipzeen was. The witch told her and Sixzip thanked her and then she started on her way.