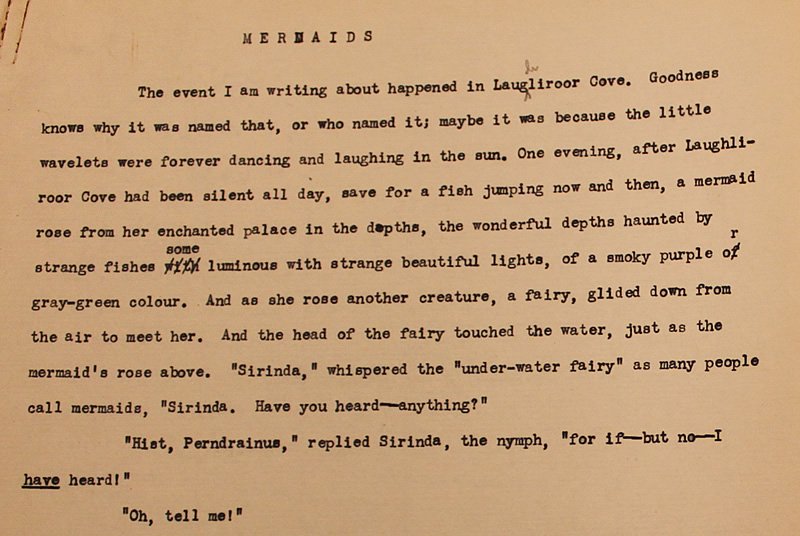 The event I am writing about happened in Laughliroor Cove. Goodness knows why it was named that, or who named it; maybe it was because the little wavelets were forever dancing and laughing in the sun. One evening, after Laughliroor Cove had been silent all day, save for a fish jumping now and then, a mermaid rose from her enchanted palace in the depths, the wonderful depths haunted by strange fishes some luminous with strange beautiful lights, of a smoky purple or gray-green colour. And as she rose another creature, a fairy, glided down from the air to meet her. And the head of the fairy touched the water, just as the mermaid’s rose above. “Sirinda,” whispered the “under-water fairy” as many call mermaids, “Sirinda. Have you heard—anything?”

“It lies, at least she said so, in that wondrous cave of her sister. Its roof is encrusted with wondrous shining rocks and sometimes even gems! There are pearls and moonstones along the bottom, too, she said, but one has to hunt for them. And oh! Perdrainee, there are such wonderful little fishes swimming about there, of blue and gold and vivid green. And in among the wondrous branches of the waving coral there are shells which can never be imagined by man—only by people who have seen it. I have been there, too, Perndrainus.

“And when I was there I saw a great big fish, all coral-coloured and silver, dart in among this school of tiny blue, gold, and green fishes, and he caught one of the prettiest, but, what do you think the victim did? Why he turned into a great moonstone and sank to the bottom. That’s where all the moonstones come from, she said.”

“Yes, dearest, I know that much, but alas! that is all. For I know nothing as concerning the whereabouts of this cave. For everywhere there are other caves exactly like it, and the greatest enchantress of the world keeps these caves changing their positions all the time, so that no one can ever find any cave he wants.”

“Oh-h.” She was fascinated. She was a young mermaid, who did not know much about even her own element, and she had only been in one cave—her own.

The beginning of an untitled story about a girl named Carolyne. Chapter 1 is the only chapter in the archives; did Barbara abandon her story? 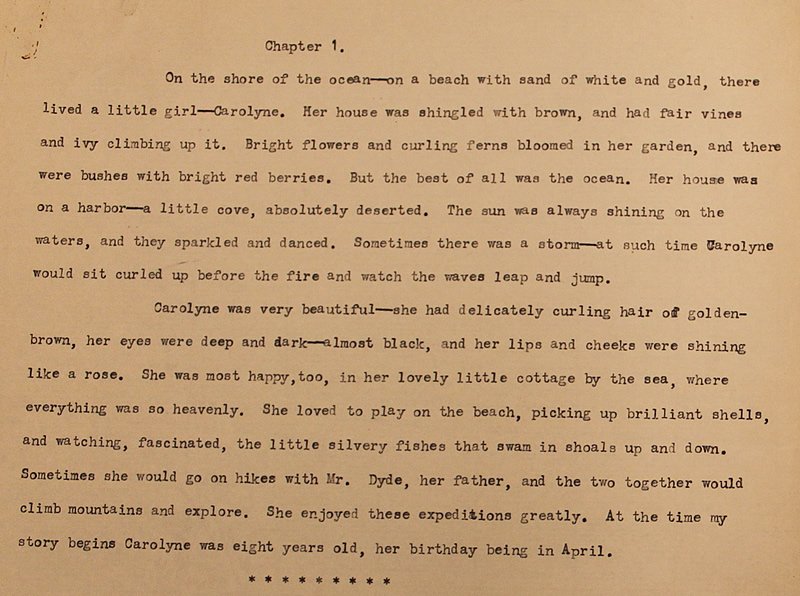 On the shore of the ocean—on a beach with sand of white and gold, there lived a little girl—Carolyne. Her house was shingled with brown, and had fair vines and ivy climbing up it. Bright flowers and curling ferns bloomed in her garden, and there were bushes with bright red berries. But the best of all was the ocean. Her house was on a harbor—a little cove, absolutely deserted. The sun was always shining on the waters, and they sparkled and danced. Sometimes there was a storm—at such time Carolyne would sit curled up before the fire and watch the waves leap and jump.

Carolyne was very beautiful—she had delicately curling hair of golden-brown, her eyes were deep and dark—almost black, and her lips and cheeks were shining like a rose. She was most happy, too, in her lovely little cottage by the sea, where everything was so heavenly. She loved to play on the beach, picking up brilliant shells, and watching, fascinated, the little silvery fishes that swam in shoals up and down. Sometimes she would go on hikes with Mr. Dyde, her father, and the two together would climb mountains and explore. She enjoyed these expeditions greatly. At the time my story begins Carolyne was eight years old, her birthday being in April.

One day little Carolyne was wandering on the beach. She was gathering shells, and she had, to her great delight, found one all tinted with yellow and orange. Suddenly, she caught sight of her father’s row-boat on the beach. It was tied to a stake which was planted in the sand. The paddles lay in it, all ready for use. Quick as thought, Carolyne leaped to it, unloosened the rope which tethered it, gave a dig with one of the oars and started off. She knew how to row, but, she had never been out alone. She knew it was forbidden, but she could not resist.

On and on she went, rushing over the waves. The sea was almost calm—little ripples were dancing about, and making little bubbles. But a wind began to come up, and it grew and grew, and Carolyne’s hair was blown about over her face so that she could not see. She pulled in the oars, and set to work fastening up her curls with a small burette which she wore, but it was of no use, they kept coming down and blinding her.

Bang! The boat was dashed against a perilous reef and was held high on the sharp points, coming to pieces with every wave. Carolyne was splashed and soaking, and, worse still the tide was coming in, and the rocks would soon be over her depth. She could not swim. Her boat was in pieces and floating away already. In despair she called wildly for help, but her voice could not be heard against the roaring billows. Higher and higher came the water. It came up to her chin, and, because of the waves, she had great difficulty in staying on the rock. After a short time there was a foaming and a roaring as a tremendous breaker came billowing in. It swept her entirely off the great rock, and bore her farther and farther out.

Suddenly she felt strong hands grasping her legs and arms. She felt an arm twined around her neck. Then she was drawn down, down, into the depths below. Silvery bubbles floated upwards as she sank down, the water became green, bottle-green, gray, black—silver! She had, naturally, been holding her breath, but, suddenly, when she felt that she could hold it no longer and let it out, then taking a deep one, water did not flow into her nostrils—it was air–pure, sweet air, scented with flowers.

She was in dry air! But, what was strange, the ceiling was the bottom of the sea—so that Carolyne, in looking up, could see the plants, shells, and strange fishes. Everything was silvery. Then she saw some beautiful girls dancing about her. They had golden hair, wild, dark eyes, and dresses of sea-plants woven together.

She repeated her question, receiving the same answer.

“Have you got it, Flirindeen?”

Then one of the crowd stepped forward.

“Can you speak to me?” said the child.

“Flirindeen, you darling,” was the answer.

By this time Carolyne had begun to think that they were addressing her, and, drawing herself up testily, said: “My name’s not Flirindeen.”

A burst of laughter

“What wonder, dear little girl,” said one of the crowd kindly. “Nobody speaks to her or does anything. You are in the land of mermaids. You will be well treated, and you will enjoy it.

“Flirindeen—Flirindeen, I love you. But let us all see it.”

A multitude of voices followed. “Yes, yes, let us see it.”